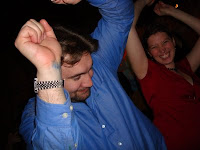 The other day, APL and I had a big fight about something relatively unimportant. The one good thing about the way we fight is that we always fight to the end. We never leave problems or feelings hanging. We just keep going round and round in circles until we figure out where we were trying to go and come up with a solution that suits us both. Sometimes this tactic keeps us up way too late at night, but mostly I think it works pretty well for us.

This time, after we finished bickering, we sat on the bed for a while in silence. Then APL turned to me and said something that I already knew he had been thinking for a long time: that he wasn’t happy. He said he missed the fun things that we used to do together, like concerts and snowboarding, and that he didn’t feel like he had the ability to make me happy anymore. He also said that he hadn’t wanted to tell me this because he was so worried about me and he didn’t want to give me anything else to deal with. He said I had enough on my plate without his sad feelings weighing me down more.

But, somehow, his declaration had a completely opposite effect on me. Instead of stress or worry I felt…relief. Because I already knew that he was unhappy. I see, feel, touch, and taste his unhappiness every single day. I’ve been overwhelmed by guilt and frustration about how unhappy I feel I am making him. But when he said it out loud I instead felt less isolated and more connected to APL, a feeling I honestly have to admit I hadn’t realized I was missing. We are both unhappy right now, though I’m not sure how many people would know that.

Most of the time I think I am able to keep a pretty cheery disposition. I keep positive, keep my head up, get my work done, and pretend to enjoy myself. On the one hand, I honestly do think there is some truth in the self-fulfilling prophecy, and that acting happy and positive can help make me that way. On the other hand, deep down I have been pretty unhappy with my life lately. But I don’t talk about it much to many people (although I guess I do talk about my unhappiness a fair amount on this blog). But I don’t think many of the people I interact with on a daily basis realize how difficult the past year has been for me.

However, as little as people recognize my difficulty, I think they recognize APL’s difficulty even less. I don’t think people realize what a demanding and frustrating situation he is in. While I am forced to adjust to this diagnosis, because this is my body, he is not. He is doing this totally by choice - a choice he must make and remake every single day. He loves me even though our relationship has morphed into something completely different from the one he signed up for. He is working hard at accepting all of this and being supportive.

Despite everything he is dealing with, APL gives me strength every single day: strength to get out of bed when I feel like I had a battle with a steam roller and lost, strength to get through the day when fatigue hits me like a hammer, and even strength to relax when it feels like I’m being stabbed with a knife. How he finds the energy to keep me going is a mystery to me. Some days, I’m in awe of him. But with how much our lives have changed and how slow our progress has been, it makes sense that he would be frustrated and unhappy. However, I think that very few people can see that about him. And I’d be willing to bet he doesn’t talk about it much. With anyone.

For that reason I am truly grateful that APL finally found the courage to say out loud that he was unhappy. Somehow it made me feel less alone and strengthened both of us by making us feel connected. And now that we realize we are both unhappy with the current state of our life, those feelings somehow seem less monstrous. We’ve started talking about things we can try and change that might work better for us. We’re going to tackle the problem together. We’re going to find the happy – however we can.

Labels: Laughter is the Best Medicine, My Amazing Little Family

Hugs to both of you. It is so wonderful having someone like APL (or CF in my case) that loves you so much!

i <3 u austin. happy = a visit to the nw this summer? camping? bbq? microbrews? noncompetitive scrabble?

WE're going to China! We'll have to find a really nice present for Austin,