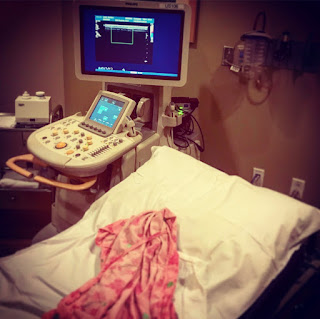 It's frustrating for anyone to visit doctor after doctor and not get any answers. But, for people living with chronic illnesses, I think it can be particularly soul crushing.

People with chronic illnesses tend to have this experience happen to them over and over...and over and over again. We are so so so tired of it all. Tired of doctors. Tired of labs. Tired of tests. We're tired when we do get answers - and exhausted to numbness when we don't. But what other options do we have than to keep going back anyways?

I am so pleased that medications now exist to control my RA that are breastfeeding friendly. Because of these advances in research, I am still breastfeeding my little girl a full five months after I had to wean both of her brothers. I know that it absolutely doesn't matter how a baby is fed - no one cares that my first grader was given mostly formula. And I know from experience that there is so very much more to motherhood than how your baby eats those first few months.

But breastfeeding has always been important to me. It was part of how I always envisioned myself as a mother. So I am beyond thrilled that my little girl turns eight months old today and we are still going strong - and my RA is still miraculously under control with Cimzia and a little bit of prednisone. I know exactly how lucky I am to be able to have this experience at all, and I really want it to last as long as possible.

However, there have been some hiccups with the breastfeeding itself. The Monday before last, I had another clogged milk duct - my fourth in less than two months in exactly the same spot. And each time that duct gets plugged, it seems to hurt even more than the last time. While I am obviously no stranger to pain, it hurt so much that Monday night that I literally fell asleep in tears. I think it scared my husband.

I know when to seek medical attention for myself, so I called my doctor first thing the next morning. They offered me an appointment on Friday. That seemed a bit too far away to me, so I asked to talk to a nurse. After playing phone tag all day long, they eventually ordered me a second round of antibiotics without me coming in and said they'd see me on Friday unless I got a fever before then.

After nearly a week of antibiotics, of course my breast looked totally fine by the time I went in for my appointment last Friday. I tried explaining that I wasn't in pain now, but that I'm concerned about it happening so often in the exact same location. Wasn't there anything we could do to stop that from happening again? Especially because every time they give me antibiotics I end up having to delay my Cimzia shot - and I know that if my RA starts getting out of control because of delayed meds, breastfeeding will be over. And I'm simply not ready to go there.

The doctor kept repeating "that must be frustrating" and "I hear you." He repeated these phrases so many times in a row that instead of truly feeling understood, I got the impression that he was trying to placate a fragile hypochondriac and move on to his next patient. It was enough to make me feel like I was a fragile hypochondriac. I tried asking again if there was anything I could do to prevent this issue from happening in the future. He finally ordered an ultrasound.

I went in for the ultrasound this morning. Having finished my second course of antibiotics yesterday, of course everything in my breast looked totally normal. I tried explaining to that doctor that I wasn't in pain now, but that I was very concerned about the problem happening so often in the same location - is there anything you can tell me that might help?

He launched into some general information about breast tissue, during which he uttered the words "and because you're not nursing," and I had to remind him that I am, in fact, nursing. That's the whole issue here. When I realized I would get nothing useful from this appointment either, I couldn't stop tears from falling as I tried to politely thank him and get out of there while he patted me on the shoulder and said he understood.

So after multiple phone calls, two appointments, and an ultrasound, I still don't know if there's anything else I can do to prevent this issue from occurring again. And maybe there simply isn't. Maybe it's just luck. But, even so, I still feel like there must be some way for me to leave those appointments feeling like I had my doctor's support and true understanding - rather than feeling like it was an infuriating waste of my time and energy.

Because when patients feel like doctors aren't helping them - especially patients who deal with doctors all the time - we're less likely to call the next time we have a problem. And that is a real problem.

It has been a loooooong time coming (since I launched the Mamas Facing Forward Facebook group in 2015!) but I'm proud to officially announce that www.mamasfacingforward.com is finally live!

The internet is teeming with advice for moms and moms-to-be, but when it comes to the unique challenges faced by moms living with chronic illnesses, the resources seem to be few and far between. Mamas Facing Forward is dedicated to addressing this very important unmet need.

While not meant to replace the advice and guidance of doctors on these topics, Mamas Facing Forward endeavors to be a "one stop shop" for moms and moms-to-be who are living with chronic illnesses and have questions or concerns about pregnancy and motherhood. We want to make existing resources easier to find and work towards creating additional resources where they are needed. We want moms with chronic illnesses to know they aren't alone and that help is available.

To help moms and moms-to-be living with chronic illnesses embrace the unique challenges we face and learn to find strength from them. To provide resources, support, and encouragement to keep facing forward - for our children and for ourselves.

Or find us on social media! 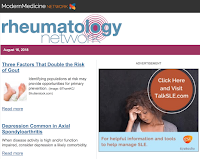 My assignments for Rheumatology Network include reporting on recent scientific studies about rheumatoid arthritis and other related diseases. Although these articles are intended primarily for a physician audience (and thus can get a bit technical and jargon-y) I know patients are also interested in scientific advances - so I still want to share links to these articles! But if you ever have additional questions, please don't hesitate to let me know!

Obesity, Hypertension, and Diuretic Use Double the Risk of Gout
Identifying populations at risk may provide opportunities for primary prevention.

Can the Mediterranean Diet Ward Off Rheumatoid Arthritis?
This dietary pattern has already been shown to reduce overall mortality, cardiovascular disease, and cancer. Do the benefits extend to RA?