This past weekend I was lucky enough to be involved in an absolutely beautiful and amazingly fun wedding. Two of my friends from law school got married – and they asked me to officiate the ceremony! Of all the weddings I have been to (five this year, two last year, one the year before) this is the first wedding I was ever involved in! I found it really rewarding to be involved in something so special. I read a ceremony that the couple had written themselves, and instead of a Bible the ceremony was pasted into The Lorax, which was so much fun! It was a really perfect weekend, and though I have to admit that I am paying for it with a lot less energy and a bit more pain this week, it was 100% worth it. So, to PN&AN, thank you so much for letting me be a part of your special day! 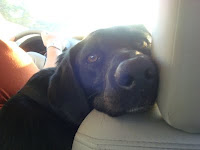 I said in my last blog post that I can do anything. I know this is true. However, as I've re-discovered for what seems like the millionth time this week, that statement comes with a caveat: I can do anything, but I can't do everything.

I’ve changed my lifestyle a lot since I got diagnosed with RA. I used to be involved with absolutely everything that remotely interested me – and when I say involved what I usually mean is in charge. I was also really bad at saying “no.” Whenever my boss asked if I could do something else for him (on top of the millions of things I was already doing) I always said yes. I always said yes when friends asked for favors too. I did everything, and, somehow, I almost always managed to do it well.

But my abilities changed drastically since getting diagnosed with RA. Perhaps my very biggest struggle in adjusting to this disease has been to figure out – and follow – my new boundaries. I still want to follow my dreams and do enough to feel like myself, but I’ve also needed to accept that I simply can’t do as much as I used to and I shouldn’t do as much as I used to.

This hasn’t been easy. I’ve had to re-evaluate my priorities. While I used to have school and work squarely at the top of my priorities list, now I always have to remember to make time for doctors appointments. I have to make time to figure out health insurance and save energy to fight with student health when necessary. I also have to make time to deal with all the problems my immune system keeps throwing at me: cold sores that never go away, bizarre skin infections, the infamous boob wound, and ordinary illnesses that affect me more than they would affect a healthy person.

I’ve had to put priorities and desires on hold to deal with hip pain, shoulder pain, jaw pain, hand pain, and lots and lots of foot pain. I have to remember to try to fit in time for exercise and weight loss, despite whatever pain I might be experiencing, because overall it will help with my health. It has been really hard sometimes to admit when I’ve reached my limits and give up on things I wanted to do.

I know that I have improved a lot in dealing with my boundaries. I now take the time to think about every decision that I make before committing myself to doing something. I say no to my boss and, unfortunately, my friends on a regular basis. I am able to put schoolwork aside to deal with my health without feeling guilty if the situation calls for it.

However, this past week has demonstrated to me that I still don’t quite have a handle on how to balance everything. It was an extremely busy week. School has started again and I am taking five classes. I need to have the reading completed for the majority of the week by Tuesday evening. I also volunteered to be “on call” in one class on Tuesday. And I am in charge of a huge conference for work and I had to attend four meetings last week. I also had two doctor’s appointments.

I know the paragraph above probably sounds insane, but I honestly thought that the decisions I made last week were well reasoned. I may be taking five classes, but two of them are only 2 credits and one of them ends in October, so the course load is not really that bad. I know I had to read more closely to be “on call,” and that takes more time, but now that is out of the way for the rest of the semester. I may have had four meetings for work last week, but the meetings were with volunteers who will be helping me, so it was necessary to meet with them to delegate some responsibility to them. And obviously doctor’s appointments need to be a priority.

While I did make it through the week – i.e. I managed to get done everything I needed to – I am only realizing now that it was too much for me. It’s weird because I have to admit that it feels really good to be back at work and at school. It feels good to be doing things I love and things that I know I am good at. I honestly feel more like myself than I have in a long time. My life feels more like my life than it has in a long time.

But, all the same, I am forced to admit that last week was simply too much for me. I have totally crashed over the weekend, even resulting in me getting extremely cranky with APL yesterday over something relatively minor. While I made it through the week, now I feel like I have been run over with a steamroller. I am just so tired. Now I am paying the price. So even though I thought I done a good job limiting myself, I guess the truth is that I still have some details to figure out.

I guess I have to admit that I still have some work to do in figuring out who I am and what my life is now that I have RA.