This morning I woke to find a beautiful email from a complete stranger in my inbox.

She had been looking for info on arthritis on Facebook and stumbled across this blog. She told me that she spent hours reading all of my entries. RA has greatly affected her life as well, so she thanked me for my words and told me that my story had touched her.

In the end, she pointed out that a month and a half had gone by without me updating this blog and said she was worried that my silence meant my health had gone downhill.

Well, for once I have good news!

The reason I have been neglecting this blog is that I have been feeling a lot better and so I have actually been really busy! For the most part, I spent just over two weeks in CHINA with my mom!! And I guess it’s about time that I write a blog post about that trip. ~;o)

To be honest, I was extremely nervous about the trip to China. I love to travel, and I’ve always been really adventurous, but this was the first major traveling I had done since being diagnosed with RA. Mostly, I was worried about my stamina, which is so much less than it used to be. I was worried that I was going to be too exhausted to enjoy myself, that the amount of activities would be overwhelming, and that I would keep my mom from enjoying herself too. I was also worried about how I would keep my ENBREL cold the whole time (since it needs to be refrigerated) and I had a lot of general concerns about my compromised immune system in a foreign country.

But, despite all these worries, I really surprised myself by somehow coming up with a lot more stamina than I ever thought I could. Don’t get me wrong – even though I was the second youngest person on the trip I still got tired far more quickly than everyone else. I found myself going to bed while the rest of the trip stayed up drinking. There were definitely days when I ached a lot – where my feet hurt too much to explore or my fingers hurt too much to use chopsticks. But I think my major accomplishment was that I didn’t let these setbacks stop me from enjoying myself. I just accepted them and tried to enjoy all the little things that I could do. And my mom and I both really enjoyed ourselves.

We started in Hong Kong, where my mom and I spent a couple days wandering around the city and seeing the sights. Then we flew to Guilin where we cruised up the Li River, which had some of the most beautiful scenery with jagged mountains, bamboo forests lining the riverbanks, and hundreds of fishermen on tiny bamboo rafts. On the cruise, my mother tried some snake wine (i.e. wine that literally has a dead snake floating in the bottom.) Supposedly it is an ancient cure for rheumatism, but I wasn’t brave enough to try it. Snakes give me the jibblies!!

Yangshuo was probably my favorite place of all. We saw a light show that featured 300 villagers each navigating their own fishing raft or wearing a costume that lit up in unison. We took a bike ride through the countryside and saw farmers in their rice patties. We even took a cooking class where we visited the market and then cooked local dishes. Though my fingers were bothering me that day and I needed some help with the vegetable chopping, the cooking class was still one of the highlights of the trip!

Then we spent three days on a cruise boat going down the Yangtze River through the Three Gorges. There was good and bad for me when we were on that cruise. The good is that I managed to walk up hundreds of steps in sweltering heat to get to see a temple. I didn’t think I had the physical stamina to do something like that, but somehow I did it. And it was totally worth it because the temple was beautiful. The bad part is that one night I got a horrendous nosebleed. It literally filled the sink with blood for an hour until my mom got freaked out and called the tour guide, who got freaked out and called the boat doctor. Who knows why I got the nosebleed. My immune system sucks? Exhaustion from hiking to the temple? General body failure? Needless to say that was less than a pleasant evening and I was pretty headachy (from blood loss?) the next day. At the end of the Three Gorges cruise we got to see the Three Gorges Dam. Honestly, I have to admit that it wasn’t as impressive as I expected.

From there we flew to Shanghai, where we explored the city and saw some amazing and seriously insane acrobats. Then we took an overnight train to Xi’an – and I actually thought the overnight train itself was a lot of fun. In Xi’an we explored the Muslim Quarter and got to see the Terracotta Warriors, which were amazing. There are thousands of them and they have individual facial features! Then we took another overnight train to Beijng, where we saw the Forbidden City and the Temple of Heaven, both of which were very beautiful.

The last thing planned on the trip was a 6 mile hike along the Great Wall of China. I was really worried about this section of the trip. Would my knees hold up? Would my toes and feet cramp? Would I have enough energy? What would I do if I got halfway through and felt like I couldn’t go on?

But I surprised myself again with my endurance. Don’t get me wrong – it was HARD. First of all, the Great Wall goes up and down and up and down and up and down about three hundred million times. Sometimes you are on really steep steps, sometimes really shallow steps, and sometimes just steep slopes. It’s rugged and rocky and you always have to watch your step. It’s a real workout no matter what kind of shape you are in. Everyone was sweating buckets – even the locals.

I had to take a lot of pain pills to get me through that day. And I do mean a lot, because it was really difficult on my joints. Also, when we got to about mile five, my legs were shaking so badly from the pain in my joints that I could barely walk. I think my mom was worried I wasn’t going to make it to the end for a while. And it must be admitted that while I made it to the end of the hike, I was totally wrecked for several weeks after I got back to the U.S. The night I got home I was jet lagged and couldn’t sleep, but I was in so much pain I couldn’t bring myself to move even to try to make myself more comfortable.

But I did it. I hiked the Great Wall of China.
And I did it only one year after being diagnosed with RA.

If you had asked me a year ago whether I could have taken this trip I would have said absolutely not. I probably would have told you that I would never really travel the way I wanted to again. But I think life has a way of surprising you, and that you really have a way of surprising yourself. I’ve discovered that if you really want something, if it really matters to you, you’ll find a way to make it work. It might not be exactly what you thought you always wanted, but you’ll find a variation that you can really enjoy. Perhaps you even appreciate it more this way.

Like the beautiful email I got this morning reminded me, there are so many simple things in life that I now find pleasure in that I might have overlooked had it not been for my RA. While a trip to China is probably a once-in-a-lifetime experience for just about anyone, for me I think it meant even more because of what it represented to me. Realistically, I know there are probably still more health troubles to come for me in my future – in fact, I have already had some since my return to the U.S. I know there will be more hurdles and more disappointments and more trial and error and more frustration and exhaustion. But I think I have found, at least a little bit, some patience to get through it all while still looking on the bright side.

After all, when things get rough, I just have to remind myself: I hiked the Great Wall of China. I can do anything.

The End of Gluten-Free 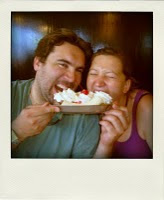 After six months of diligently avoiding all gluten, I've decided that my gluten-free journey has come to an end. To be perfectly honest, I don't think the gluten-free diet has had any direct effect on controlling the RA. I've been experimentally eating gluten again for about three weeks and I'm still feeling fine. Since I have so many other health-related issues (and eating gluten-free is a lot of work) I decided not to do it anymore.
But I did learn a lot from my gluten-free experience. It taught me to pay attention to all the food I put in my body. As a result, we have adopted much healthier general eating habits. Being gluten-free also helped me adjust my attitude in order to make the major life changes that have been necessary to adapting to living with RA. The other blog was also a fabulous project for keeping me sane while I was out of school!
For anyone who still is gluten-free, hopefully Gluten-Free From A to Z can still serve as a database when it comes to purchasing gluten-free products.