You can find a complete list of all the articles I have published on Answers.com by clicking here. Below is a list of the new articles I published in the month of August.

Not too long ago, I posted the first guest post this blog has ever featured. I was also lucky enough to be invited to write my first guest post on Stacey's blog, Life Autoimmune. I hope you'll check out my guest post and Stacey's amazing blog, where she shares her story about living with her own RA and her daughter Jordon's JA. 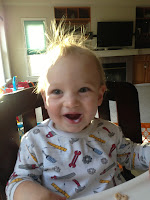 I knew on Saturday. We were in the car when I felt a small twinge of pain in the joint on my right thumb. Though I didn't want it to be true, somehow I knew immediately that it wasn't an isolated, random pain.

And, unfortunately, I was right. By the end of that evening both joints in that thumb hurt. By the next day the left thumb hurt too. Then the other joints on both my hands became inflamed. And now the pain has begun to travel into my wrists. It's the RA "F" Word: a flare.

It was in March when I got prednisone injections in both of my hands to keep my RA at bay. At the time my rheumatologist told me the relief from the injections would last two to three months, so I guess I ought to feel lucky that I made it four.

Now I suppose there's nothing left to do but wait a few more days so that I can determine whether this flare is contained to my hands or whether other parts of my body will be affected as well. Then I guess I will make an appointment with my rheumatolgist and decide what to do next. Because I need to stay as pain-free and functional as possible - not only for my sake but also for my sweet baby boy.

Labels: Discouraged, Pain in the Hand

Babysitting For A Cure 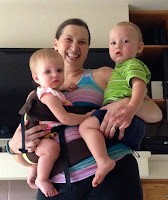 In September, APL will be participating for the second time in the California Coast Classic. He'll be riding his bike 525 miles from San Francisco to Los Angeles to raise funds and awareness for the Arthritis Foundation. This year he will be joined on the ride by his brother, his brother's girlfriend (who suffers from ankylosing spondylitis, an arthritis of the spine) and their cousin (who also rode two days of the ride last year). With OZL safely in the hands of his grandparents, I will also be volunteering as support staff along the ride this year.

Last year, we had a very compelling story to tell about the difficulties of living with RA while pregnant and on bed rest, my struggles after OZL's birth, and my decision to stop breastfeeding so I could go back on my RA meds just before the ride. Our friends, family members, and co-workers gave generously, and we were able to raise $2,450 more than the $3,000 minimum we committed to.

But while we are extremely appreciative of the generosity of our friends and family, we really don't want to depend on them to give to our cause all the time. Especially here in Colorado, where most of our friends are young parents with babies and no one has a lot of money. So this year we have been looking for a company who might be willing to sponsor all or part of Team Z, but although we have contacted more than two dozen companies we haven't had any luck yet.

And that's when the idea of "donate a date night" hit us. While some people run or race for the cure we've been babysitting for a cure! In exchange for a donation to the Arthritis Foundation we've been watching our friends' babies so that they can go out on a date. So far we've enabled our friends to go to a movie, an anniversary dinner, and rock climbing - all for arthritis! Everybody wins!

APL is still about $1,200 short of his minimum for this year, and other members of Team Z need to raise even more than that. So hopefully we'll get a few more takers on our "donate a date night" idea! In the meantime if you are interested in making even a small donation to Team Z we would very much appreciate it! Every little bit, no matter how small, helps us reach our goal and raise awareness and research funds for the 50 million adults and 300,000 children who must live every day with arthritis.

It's the open enrollment period for APL's work - that lovely time of year when we spend hours beating our heads against the wall in the hopes that it will help us understand the hieroglyphics of insurance plan options (newsflash: it doesn't). We're never quite sure how to pick the plan that has the best coverage at the best price. What kind of monthly payment can we afford? How high of a deductible do we want? Can you tell if there's a co-pay? How much is the co-pay? What if I need to see a specialist? How much is covered after the deductible is met? What is covered before the deductible is met? Will my enbrel be covered? What if one of us needs to be hospitalized?

The information provided by the insurance companies does virtually nothing to help us figure it all out. Why do they have to make it so crazy complicated?!?! We did, however, find this video that at least clearly explains the difference between an HMO, PPO, and HDHP plan. We found it pretty useful to have this straightforward explanation so I thought I'd share the video here.

Best of luck to everyone in deciphering the crazy hieroglyphics of health insurance!! 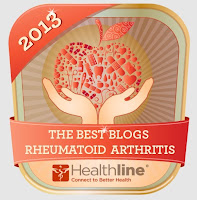 For the second year in a row this blog has been selected by Healthline as one of the top rheumatoid arthritis blogs on the web. I'm truly honored to be part of such an awesome community of bloggers!

The Faces of Arthritis