Today is World Arthritis Day! Please take the time to teach at least one person that arthritis isn't just for old people! I was diagnosed at age 25 and I've met children who were diagnosed as they were learning how to walk. Autoimmune arthritis is a lifelong condition and there is no cure (yet!) but by promoting awareness you can help those of us who have to live with arthritis every day.

With increased awareness, hopefully those of us dealing with arthritis won't have to face situations like I did yesterday.

Recently I've started to feel a bit frustrated by the long, exhausting days I've been spending taking care of OZL all on my own. I'm sure most new moms feel exhausted and achy, but the extra fatigue brought on by my RA and the pain in multiple joints can sometimes make a regular day feel almost impossible to get through. And though it sometimes feels easier to stay home when I am feeling so tired and achy, being home alone all day with an infant can actually get pretty lonely. It's not the greatest for my sanity. So I know I need to get out and do things for myself and find support where I can.

Which is why I was so proud of myself this morning when, despite feeling tired and achy, I got myself and OZL dressed and went to a local infant playgroup. Since infants don't really play with each other, the "playgroup" is really more of a mommy support group. The facilitator had us go around the room, introduce ourselves and our babies, and then talk about the parenting challenges we were currently facing. Some mamas talked about sleep issues with their babies. Others talked about disagreeing with their husband's different parenting styles. Others talked about struggling over choosing whether to stay home or go back to work. Then the facilitator and people in the group offered up any suggestions that they had for facing these challenges. When my turn came, I took a deep breath and opened up to the other moms about having RA and struggling with some of the more physical aspects of motherhood. Nobody had any suggestions for me, but they did listen and it did feel nice to acknowledge my struggles out loud. Plus we left the house! And talked to people!

When the facilitated part of the group was over, a lot of the mamas hung around and talked to each other for a while. I met one very nice mama with a ten month old who was trying to get rid of some bigger boys clothes - which OZL and I very happily accepted! Then another mama asked me for my phone number and email address. I was delighted - I thought she wanted to be friends or ask me out for coffee or something!

But, as it turns out, she didn't really want to get to know me any better. What she wanted was to talk to me about RA. And she didn't want to hear about my experiences or share her personal experiences with RA. No, she wanted to offer me the miracle cure.

I was flabbergasted. I had zero idea how to respond. I mean, while there actually is some scientific evidence that bacteria could be linked to triggering RA, it's certainly not as simple as "just get the bacteria out of your body and then you'll be fine for the rest of your life hooray!!" Because if there really was something so simple and foolproof that you could do to actually cure arthritis, I'm pretty sure my army of doctors would have told me about it!!!

But I was at the playgroup to try to get support and make friends, so I wanted to be polite and try keep the friendly vibe going. After taking a few deep breaths, I told her I had never heard about this theory. I asked her how she knew about it - did she have a personal connection to arthritis? No, she heard about it from a doctor she worked with. I asked what kind of doctor? She said a homeopathic one. I said that I certainly found natural remedies worth looking into, and that I've even heard of them working for some people, but I explained that arthritis is actually quite a serious disease. I told her that kids can get it and that I have to take pretty serious medication to keep my symptoms under control. She told me I wouldn't need to use medications if I was willing to get the bacteria out of my body. She said it was a matter of me being willing to do it, and if I didn't I would have a lifelong condition. It was at that point that I thanked her for her information (yes, for some reason I actually thanked her) and changed the subject to how cute her daughter was.

I left the playgroup feeling...really weird. I felt frustrated that I didn't do a better job educating her about the realities of arthritis. I mean, I really tried to, but I was so surprised and flustered that I wasn't able to come up with as many facts as I would have liked to. But I guess it doesn't really matter, because she wasn't listening to me anyways. She was convinced that there was a simple, natural cure for my arthritis - which, by her logic, essentially means that I've been struggling and suffering for the past four years by choice. If only I had been willing to try her natural remedy I wouldn't have to take such nasty drugs and I wouldn't have had to make the difficult decision to stop breastfeeding (which I'm sure she thought I never should have done). And while I know the logic is absolutely absurd, the implication that my struggles with arthritis have been some kind of "choice" on my part made me feel pretty awful. No one chooses to have a lifelong illness.

Today I made myself vulnerable to a bunch of strangers looking for support, but instead I got judgment. And that's messed up. But at least I did my best to be polite and educate her. I'm not sure what else I could have said. Now I just have to do my best not to let this ignorant advice ruin my day. 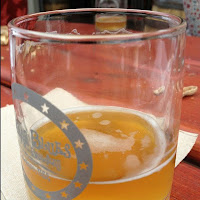 Last weekend I did something stupid. From the title of this post, I'm betting you can guess what it was.

We had our mommy/daddy friends over for dinner on Friday night. I made buffalo joes. We had a wonderful evening of talking and laughing - and trying to wrangle four babies. At about 8pm we were trying to get all four babies to go to sleep so that we could hang out for a while longer. Needless to say it was not going well (I believe one of our friends used the term "baby apocalypse" to describe the situation). We finally got one baby to sleep in the rock 'n play downstairs while the other three caused chaos in the guest room and nursery upstairs.

Maybe it was because he missed his bath (part of his bedtime routine) or maybe it was because of all of the excitement in the house, but OZL was being extremely fussy. So were babies #3 and #4. But as I rocked OZL in the nursery and tried to get him to calm down, I realized it was finally quiet in the guest room. When I poked my head through the door a few minutes later I figured out why - both babies were happily nursing while their mamas breathed a sigh of relief. And it was then that I got hit by a wave of sadness I never expected.

Suddenly I absolutely could not handle the crying baby in my arms. How was I supposed to calm him and reassure him if I couldn't nurse him? What kind of mother was I? For a moment I felt lost and didn't know what to do. Then I took a deep breath and did something responsible: I went downstairs, told APL I needed a break, and asked him to be in charge of OZL for the rest of the evening (which he happily did). Of course, I then did something quite irresponsible: drank as much as I wanted since no one but me is dependent on my body anymore.

On the plus side, I ended up being able to relax, move past my sadness, and actually have a really amazing evening with my friends. I honestly can't remember the last time I laughed so hard. But on the downside, since I haven't done any major drinking for about a year, I pretty much destroyed our Saturday with my horrible hangover.

I have to admit that it's quite an adjustment to have my body back to myself again. It's been a very long time since my body has been completely my own - with my choices affecting no one but me. It was almost exactly a year ago that I found out that I was pregnant, but it was ten months before that that I first stopped taking my meds to prepare my body for pregnancy. So I essentially started turning my body over for OZL's use in December 2010. Which means that it has been nearly 2 years since my body has really, truly been my own.

Considering all that, I guess it's not surprising that I've been dealing with some body-image issues. But that will have to be a post for another time, because I can hear you-know-who waking up from his nap!