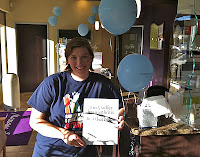 Yesterday, I got a massage in support of the Arthritis Foundation. Best fundraiser ever! What a relaxing way to donate money to a good cause! We're still waiting to hear from the national office about exactly how much money was raised yesterday, but hopefully it was a really successful event.
At the request of my local Arthritis Foundation office, I arrived at my local Massage Envy a few hours early to thank the owners and talk to customers about how they were helping to raise funds for arthritis. The owner was really friendly and said he thought the event was going well. He took a few minutes to talk to me about arthritis, and I think he even learned a few things from speaking with me. For example, he seemed surprised to hear that kids get arthritis too! I'm really glad that I got a chance to speak with him, because I think our sponsors should definitely know what they are sponsoring!
When it came to talking to people waiting to get their massages, I have to admit that it turned out to be a lot more difficult than I expected it to be. For one thing, most people seemed to be in a personal relaxation zone, and I didn't want to be too annoying while they were trying to relax. But also, though I know the message of arthritis awareness well enough, this was the first time I had ever delivered it in person to complete (and possibly uninterested) strangers, and it turned out to be a little bit outside my comfort zone. But I challenged myself and pushed forward. And thankfully the Arthritis Foundation gave me some jar openers to hand out, which made it much easier to approach people!
Ultimately, most of the people I talked to yesterday had no idea that their massages would be benefiting the Arthritis Foundation - they were just there yesterday by coincidence. But everyone seemed pleased to hear about the fundraiser when I explained it, and one of the girls at the front desk assured me that some people had mentioned the fundraiser when booking their massages for yesterday. Most people accepted the jar opener I offered them, but didn't talk to me any further.
However, I did have about 5 or 6 good conversations yesterday. A few people either had arthritis themselves or knew someone who did, so they were especially pleased to hear about the fundraiser. But I think my favorite conversations turned out to be with people who didn't know anything about arthritis but were interested in finding out - including one guy who flat out told me that I was far too young to have arthritis. Since these folks were interested, it was actually fun to talk to them about the different kinds of arthritis and what the Arthritis Foundation does to help. I found myself talking so comfortably about my own RA to complete strangers that I surprised myself.
It was only a couple of hours chatting with people in a waiting room, but I'm quite proud of myself for the work I did yesterday. For one thing, there are now at least a couple more people in the world who understand that there are many forms of "arthritis" - and that kids and young adults can get arthritis too. I'm also proud of myself for taking a deep breath and stepping outside of my comfort zone to do something positive - it wasn't easy to take the first step, but I have to admit that it did get easier after that.
I'm glad to have made at least a little bit of difference on World Arthritis Day - because every little bit helps.

My sisters, friend & I went to our Massage Envy and got massages!

MANDY: Awesome! I'm really glad you were able to recruit some people to get massages for the cause! ~;o)