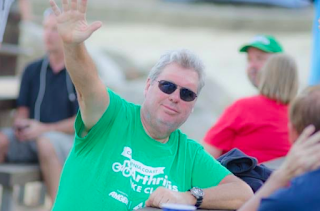 Facing Forward is a series that shares the lives of people living with arthritis and other invisible chronic illnesses. The goal of the series is to see how we are similar and how we are different - and to remind us to keep moving forward because we aren't alone!

How are you currently treating your condition?
I had a right total knee replacement in February 2015, after an arthroscopic "clean out" surgery was unsuccessful and they found that I had an osteophyte that had torn up my meniscus (knee cartilage) and even had chunk of it speared like trash on one of those sticks they use to clean up parks.

After the TKR, I worked my physical therapy very hard.  Because of my inability to exercise (and a job that required way too may hours and too much stress), my weight had ballooned, so I tried to walk frequently and watch my weight.  I had a three month off work recovery period and when I returned to work, I quit.  I saw that the job was a major impediment to my recovery and that it was a major factor in exacerbating my symptoms.


After my replacement knee was strong enough, I began to try to ride my bicycle again.  It had been quite a few years since I rode it seriously (that darned job and all).  I could only ride it on very flat trails and only for about three to six miles before I was physically exhausted and I needed to ice and elevate my replacement knee.  I knew I had to keep up with it, but it was hard.

September of 2015, I learned that a friend of a friend was riding his bike from San Francisco to Los Angeles.  I was intrigued and figured that having a goal like that would help focus my training and recovery.  It was something I could build up to in five or six years, or - more realistically - never.   Then I learned that it was to raise money to help fight arthritis.  I'd heard of charity bike rides for such causes as AIDS, lung cancer, leukemia, diabetes, etc.  I had even participated in some.  But I had never heard of an arthritis ride.  I took it as a sign from God (fate, or whatever) that I HAD to do the ride and right away.

So, I signed up for the 2016 California Coast Classic (CCC) during the 2015 CCC.  I was committed. I was going to do the ride. I wasn't concerned about the potential of losing the $75 registration fee, I was concerned about the "loss of face" of not doing the ride, because I had told everyone I knew (and many I didn't) through Facebook.

I spent the next six months in dread and fear about not being able to do the ride.  I was in NO shape, whatsoever, for such an undertaking.  I would lie awake at night, unable to sleep, thinking "What in *#$*) have I done?!"  Meanwhile, I joined a local bike club and struggled to keep up with the slower riders on the easier rides.  Between riding 5-6 days a week and watching what I ate (having more free time meant that I could cook most of my family's meals and control what went into them), I steadily lost weight and gained strength and speed.  Six months in, and I was hanging with the faster riders.  A few months after that, and I was being chided by the other riders for being too fast and too strong.

In preparing for the CCC, I rode 7,180.5 miles and lost some 90 pounds.  That led to strengthening my replacement knee, but the arthritis in my left knee continued to progress.  It's been a balancing act between the progress of the disease and the relief I have from weighing a lot less, thus putting a lot less stress on my knee.  Because it doesn't involve full extension, I can - with care - ride for long distances without left knee pain.  However, I can only walk a few blocks without limping and pain.

The 2016 CCC, itself, was a challenge, but I was more than physically ready for it.  It was a great joy to see everyone working so hard to help fight arthritis.  I signed up for the 2017 CCC, too.


What are your favorite tips and tricks for managing everyday tasks?
I ride my bike to feel better and to lose weight and get in shape.

How do you manage to keep facing forward every day?
Like there's a choice.


If you could go back to diagnosis day and tell your past self one thing, what would it be?
It's time to change your life around.


Would you like to be featured on Facing Forward? If so, please send an email to mariah@fromthispointforward.com.