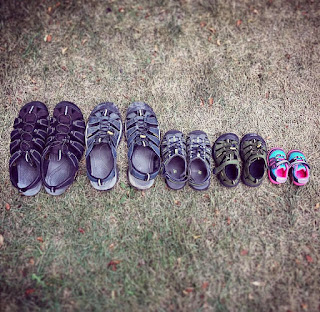 Those of you who follow me on Instagram will likely have already seen this news, but it just occurred to me that I hadn't yet announced it here! I actually blame the news itself for my lapse in brain power haha! ~;o)

We're expecting an addition to the family - and it's a girl!

The whole family is very excited, especially my five-year-old son, who had spontaneously asked me for a baby sister on multiple occasions. He keeps running up to kiss my belly at random times during the day. It's really the sweetest thing ever. His three year old brother was mostly just happy we broke the news with a pink frosted cookie, ("can I have another sister cookie pweese??") but even he seems to be adjusting to the idea and getting excited.

I'm currently about 14 weeks along and, for the most part, doing ok. Definitely still dealing with more morning sickness than I would like, but not quite as bad as the last time around (when I actually lost weight from vomiting so often). I certainly have some aches and pains, but this seems normal to pregnancy for the most part.

Considering what happened with my RA during my last pregnancy and after consulting with a perinatologist, I've made the decision to stay on Cimzia during most of my pregnancy. Cimzia is a TNF inhibitor, which are now generally considered quite safe for use while pregnant. I ended up using Enbrel last time around, which is also a TNF inhibitor. I had actually planned to go back to Enbrel this time, as it is a biologic that has been around for quite a while (a lot longer than Cimzia), I had already used it during a pregnancy, and I had at least some reason to think it would likely work for me. However, due to my insurance plan's step therapy policy, I was forced on to Cimzia.

The perinatologist and I were both gearing up to fight my insurance - but before we launched our attack she did a bit more research on Cimzia. Although there is a lot less data on this newer biologic, she discovered something about the structure of the Cimzia molecule. It turns out that Cimzia lacks the antibody that is responsible for placental transfer. In English, this means that (at least in rodent models) none of the drug was transferred across the placenta to the baby. So, by happy bureaucratic accident, it seems I have ended up with what may be one of the safest TNF inhibitors for pregnancy. It's working relatively well (though not as well as the Rituxan, I'll admit) so I'm sticking with it for now. And I certainly already joined the Mother to Baby study to contribute our data to future moms-to-be!!

Baby girl will be a planned C-section at the end of January. At some point in the future, I'd be happy to write more about how we made the decision to expand our family - because given my own health it certainly wasn't an easy one. I'm also happy to discuss my medication research and decision in more detail too. Though I plan to try to stop the Cimzia during the third trimester - so the baby can have live vaccines when she's born - I'll likely re-start soon after delivery and use it while breastfeeding too.

In the meantime, we're all enjoying watching my belly grow (and with baby number 3 it's definitely already growing!) The boys can't wait to feel her kick! And I promise to try to keep you posted on how things are going from now on!

Congratulations, Mariah! Wishing you the best throughout this new pregnancy, perfect health for you and your little girl, and warm wishes to your family. YAY!!

I am so frigging happy for you all! Wishing you a wonderful, healthy pregnancy and a (very calm) healthy, and happy baby girl.

Congratulations! This is such wonderful news!

Sheryl and I wish you and your entire family the very best. It is exciting to know a new baby is on the way. If she is anything like my granddaughter, she will be born with all the males wrapped around her little finger.