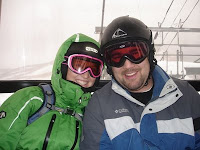 After a weeklong delay, I finally got my fourth Remicade infusion on Wednesday. Aside from a huge bruise on my hand from the nurse’s first failed attempt at placing the IV, the infusion went off without a hitch.

During the week that I waited for my rescheduled infusion I actually felt a lot worse than I had in a long while – really exhausted and achy. But, after some reflection, I realized that might actually be a good thing. Maybe it means that the Remicade is working, since I felt worse when my next infusion got delayed. And in the days following the infusion I felt quite a bit better. I even managed several hours of shopping and errand running yesterday that would have been unthinkable last week. So maybe we are finally on the right track with my treatment. And that is a very good thing.

Still, I can’t help feeling a little bit sad. APL went skiing today – and it looks like it’s a fabulous powder day, since it has been lightly snowing all morning. But obviously I wasn’t anywhere near well enough to join him on the slopes. Just the thought of putting my feet in snowboard boots makes me cringe a little. And I may be able to withstand several hours of running errands, but I certainly don’t have the energy required for snowboarding.

I feel sad that I can’t be out on the slopes today, doing something I love with someone I love. But I was sort of surprised when I realized that, more than feeling sad for what I have lost, I felt sad for what APL has lost. Yesterday APL had a lot of trouble finding someone to join him today – friends were working, studying, lazy, etc. It used to be that it didn’t matter if our friends had 100 excuses, because we always had each other. But now there are times when I simply can’t be there for APL the way I used to be. And it’s sad.

I don’t really think that many people have bothered to think about how hard my RA is on APL. He certainly didn’t sign up for this either. This wasn’t the way he thought our relationship would turn out. I’ve had to change my life and accept some losses – but so has APL. He has made sacrifices and accepted changes that he didn’t want too.

Despite these sad things, the fact that APL still stands by my side and supports me 150% just goes to show how lucky I am to have him. And that’s something for me to be happy about.

I can really sympathize with what you're saying here Z. When Chris and I first met, we used to go on crazy hikes and even climbed a couple of smallish mountains. Of course, I have not been able to do those types of things with him for some time now and he understands that.

It's sometimes heartbreaking to see him go off with a friend to do something that I would have liked to do with him, and that's when I use what I have to do something special for him. I knit socks for him... I make his favorite dinner... I pick up some toasted fresh almonds at the store...

It doesn't have to be anything spectacular, but it does let him know that I'm thinking about him all the time and that I appreciate him. *Smile* as an added bonus, the little projects of love can keep me busy when I'm missing my career, so there's benefit for both of us :-)

As it happens, I was assigned a case study on the launch of an alternate RA treatment, HUMIRA, for my pharmaceutical management & economics class this week. Out of curiosity, what made you and your doctor settle on Remicade instead of the home-based injections like HUMIRA or Enbrel? My (limited) understanding is that they're clinically pretty equivalent, but differ substantially in presentation and life-style impact.

Maybe I'm not health administratory enough, but I'm not sure I understand what "presentation" and "life-style" impact mean! ~;o)

In any event, I was feeling pretty awful when my doctor and I first started discussing Remicade, so I honestly don't really remember the details of that discussion. I do remember that I told him that the treatment we were currently trying (methotrexate alone) didn't seem to be doing anything and I expressed a desire to start feeling better sooner, since I was starting to struggle with school and worry about finals. He said that Remicade was more aggressive and fast acting, and that sounded pretty good to me. He said the reason we didn't try it immediately is that it is so expensive. I think I might have also told him that I wasn't sure I would be able to give myself an injection, so maybe that's why he went with Remicade over Humira.

Honestly, the rheumatologist suggested Remicade as the next thing to try and I read about all the horrible risks and then decided I felt horrible enough to say ok. So that's how we decided. ~;o)

But if you have more specific questions, I'm happy to try to answer them.