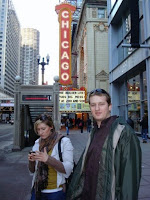 I must admit that I’ve been sort of lax about updating this blog lately – primarily because nothing too exciting has been going on in my life. Since I temporarily dropped out of law/grad school, I’ve been catching up on a lot of stuff that got put off last semester. I finally sent in the paperwork and got the reimbursement for part of the cost of my very first Remicade infusion. I went to the eye doctor to discover that my vision has gotten worse yet again. I had checkups with regular doctors (i.e. not rheumatologists). I reorganized my closet. I gave the puppy a bath. Aside from these few productive things, I’ve mostly been resting and relaxing. And I am feeling a little bit better.

With this extra time on my hands, I decided to go and visit my sister in Chicago last week. My brother also flew out from Portland so the three of us could spend a couple of days together. Unbecoming of Chicago in the middle of February, it was about 50 or 60 degrees and gorgeous the whole time, which worked out really well for me and my creaky joints. We had an awesome time being tourists together.

It was the first time I had seen my brother since he turned 21, so we all went out and had a few drinks together in celebration. We took in the view from the 99th floor of the Sears Tower (which is the tallest building in America - taller than the WTC was, apparently.) We strolled along the lake and we saw a few of the winter exhibits at the Lincoln Park Zoo, which is a free zoo. Let me tell you, pygmy hippopotamuses are seriously adorable. We were disappointed that the beluga whales were on vacation while their habitat was remodeled, but we enjoyed the aquarium anyways. We sat on the couch together and watched stupid movies with my sister’s flat-faced one-eyed cat (you heard me correctly.) On our last night my brother (who just graduated from culinary school) made some amazing chicken enchiladas and I made some margaritas. It was a lot of fun.

I did discover that being gluten-free on my own, without the support of APL and RK who know the ropes, is a little bit more difficult than I expected. It was harder to pick through menus and ingredients lists without their help. And even though my brother and sister did their best to support and help me, I had a couple of disappointments. Chicago has a huge Polish population and my family is 100% Polish. One afternoon my brother and sister went to the Polish grocery store and brought home some Polish food that we have all loved since we were kids: pierogis and kruschiki.

Pierogis are little dumplings stuffed with various ingredients like potatoes, cheese, cabbage, sauerkraut, meat, or mushrooms. They were off limits for me because of the flour in the dumpling dough. Kruschiki are Polish cookies, sort of like long fried donuts covered in powdered sugar and, as a pastry, obviously made with flour and off limits for me. I was pretty sad that I couldn’t eat these treats. But my brother and sister were super sweet about it. They brought me some cheese puffs from the Polish grocery, the only snack they could find that was gluten-free, so that I wouldn’t feel bad. Unfortunately, the cheese puffs tasted like packing peanuts. So that was a little disappointing.

But, in good news, I discovered that my stamina and physical abilities have drastically improved from the early days of my diagnosis. We did a lot of walking while we were being Chicago tourists, including the slow kind of museum walking that is usually exhausting for everyone. We stood around waiting for trains and lingered through exhibits and spent several hours on the go without sitting down at all, activities that would have devastated me months ago. While my feet hurt a lot and my legs were really sore, I was really proud of myself for not slowing us down too much. I’m obviously not back in the shape I’d like to be, but I am making progress. And that feels nice.

However, I am still having trouble determining my boundaries and I did have a minor breakdown when I got back to Colorado. I was so exhausted that I got upset at APL over something totally stupid and the next thing I knew I was crying in a grocery store. We went home and I took a little nap and felt better, but then we watched a couple of episodes of House and there I was crying on the floor again. (Note to self: Show about people dying from serious illnesses probably not the thing to watch when feeling upset about my own serious illness.) After I got the second round of crying out of my system, we realized it was snowing and so we took the puppy out to play in the fresh snow under the streetlights and I found myself laughing. So I exhausted myself to the point of a roller coaster of up and down emotions. I still have a ways to go in figuring out my boundaries and understanding my weird emotions about this whole new life I’m making.

But, in the meantime, I’m really glad I got to spend some time with my brother and sister in Chicago.

I am so glad you had such a great time with your siblings in Chicago! I totally understand the post-trip exhaustion. I am in it right now! It happens to me every time. I think it has to do with getting so excited and having enough adrenaline in a trip that one over does it. I always take two days after a trip to relax and do, well, nothing.

I love the show House too, but sometimes it hits a little too close to home. I have come up with a drinking game for it. (Although we never actually drink, we just say drink .. jaja!). Every time House mentions a disease I've been diagnosed with, or does a procedure I've had done ... drink! Totally stupid I know, but it makes it a little funnier. :)

Actually, last time we watched House they mentioned methotrexate (one of the drugs that I am on) several different times! So we'll have to add "medications we are on" to that list. ~;o)

I think the next time we get together we must play the House drinking game and then move on to Rock Band :).