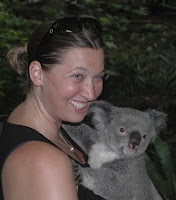 Well, we're finally back in Boulder after an amazing three week adventure Down Under! I'm not going to lie: I'm physically wrecked from all the traveling it took to get back home (30+ hours). Not to mention the body strain of the 3 weeks we spent living in the back of a van. Even though the camper was a major step up from hostel backpacking, we were still roughing it quite a bit. I think I have basically slept most of the past 48 hours that we have been home, and literally every joint in my body hurts. But it was 100% worth it!

Christmas in Byron Bay was a bit weird. For one thing, it was essentially the same as every other day except that half the people on the beach that day were wearing Santa hats! The only other difference was that the whole town was closed. We had Christmas dinner at a curry house, as it was pretty much the only place in town that was still open.

While I finished up my class, we spent a lot of time exploring the area around Byron Bay. We visited the town of Nimbin, which APL described as "Marijuana Disneyland." It was...interesting. We took a walk in the beautiful rainforest of Nightcap National Park and got leeches in our shoes! (Ewww!!) We explored the beaches both north and south of Byron Bay and found they were all gorgeous! We made one attempt to go SCUBA diving in Byron Bay, but were sadly defeated by 15 foot swells and an icky bout of sea sickness.

I took my exam on New Years Eve and we left Byron Bay, which was absolutely overflowing with New Year's party people. Not our style. Instead, we drove many hours north and welcomed the new year, just the two of us, in a quiet campsite in the middle of a dark forest in Byfield National Park.

The next morning we welcomed 2010 with our first wildlife sighting - some kangaroos!! Later that day we saw literally thousands of enormous (and slightly terrifying!) bats, hanging off trees in broad daylight! We then traveled to the Town of 1770, where Captain Cook first landed in Australia. From there we took a tour on a LARC, a Light Amphibious Resupply Cargo. A LARC is basically a boat/jeep that drives straight off the beach into the water. APL particularly enjoyed this part, and now says he wants a LARC of his own. It was great fun.

We also spent a day SCUBA diving on the very southern end of the Great Barrier Reef, which has literally been my dream vacation destination since high school. Though we had a lot of rain on this trip, we were lucky enough to get a gorgeous sunny day for diving, which made for better visibility. Between our two dives we saw a billionty gorgeous and brightly colored fish, a five-foot sting ray, an enormous fat shark, three manta rays (which I had never seen diving before!!!), two large sea turtles, and one baby sea turtle who swam with just me and APL for a few minutes. It was awesome. A perfect day on my dream dive site!! (Though, I have to admit, halfway through the second dive I completely ran out of steam - that gear is heavy! And the diving was actually a lot harder on my joints than I expected it to be. But I was so happy to be there that I just ignored the pain and took a lot of vicodin the next day.)

From there we took a tour of the Bundaberg Rum Factory (which smelled amazing) before venturing inland. We spent a day at Bunya Mountains National Park, where we got to see some wallabies close up and feed some wild birds, which landed on my head. (Ew!) We were also on the lookout for giant stinging trees and 11kg pine cones, both of which can kill you. (Australia is particularly good at having things that can kill you!!) We went wine tasting at a tiny winery, basically the owner's backyard, where we bought a bottle of wine to share with RK when she visits next week!

We ended up back in Brisbane a day before we needed to return the camper, so we decided to make a visit to the Lone Pine Koala Sanctuary, the world's first and largest koala sanctuary. I am so glad we did, because it was so much fun! We both got to snuggle a 3-year-old koala named Zap - she was amazing!! We also saw a sheep dog demonstration, and were amused by how much the working border collies reminded us of our River. We got to feed and pet kangaroos as well. I even made friends with a kangaroo, who let me give him a back-scratch for a full 10 minutes! And APL really enjoyed seeing the birds of prey in flight.

Our last night in Brisbane, in our hotel room, APL and I were laying in bed talking about what an amazing trip it had been. Then APL asked me if we had done everything I wanted to on the trip. I told him yes, the trip had been perfect. But he said there was still one thing left for us to do. And then he slipped a ring on my left ring finger and asked me to marry him!!! I was honestly so surprised that I actually asked him if he was serious before saying yes!!!

So now APL and I are home and engaged!! We are both really excited to have something so wonderful to look forward to. And I can't even begin to explain how happy I am that I will have APL by my side for the rest of my life.

Congratulations to you and APL! May you have many, many wonderously happy years together!

Thanks! It sure was a once-in-a-lifetime experience!! ~;o)

blargh! You just made me squeal and cry. Love love love this, and love you guys too!!