Or Maybe I've Been Halloweened!!! 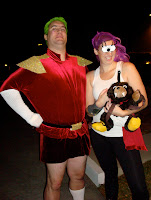 After re-reading my last post, I've decided that maybe I shouldn't completely blame my current weakened condition this week on the sick students. To be fair, I did have a pretty fun-filled (and relatively exhausting) Halloween weekend.
The weekend started when APL and I went to a costume party at our friend MM's house on Friday evening. If there had been a costume contest, I swear we would have won because we had the most awesome costumes ever (I am ever so humble!) We went as Zap Brannigan and Leela from Furturama. I even had a Nibbler purse! The party was a blast!! Our awesome friend MM even put a bench in the basement especially so I would have someplace to sit down - and he ordered my favorite beer (for the record: Mama's Little Yella Pils from the local Oscar Blues brewery). Due to MM's thoughtfulness I was able to sit down for most of the evening and save my energy, but we still stayed out very late that night.
On Saturday I literally stayed in bed until 5:30pm, whereupon I got up and got ready for the next party: our 5th Annual Pumpkin Carving Party. This was pretty much a chill evening at home where our friends all came over to carve pumpkins. We ended up with some awesome jack-o-lanterns this year. I did Leela. APL made a crazy sun/cloud/lightning bolt design. We also had a mummy, a Jack Skellington, a creepy guy peeking through the blinds, a fire breathing tree (yes, you read that right), a candle, a dark mark (re: Voldemort), a bat, a Cartman (re: South Park), and a barfing pumpkin. After we finished carving, we lit them all and turned off the lights and sat around in the dark living room talking and enjoying the glow.
I slept until about 3:30pm on Sunday, but despite the extra sleep I was still feeling pretty beat by the time I got up. But, Sunday was actually Halloween so I couldn't just stay home! We got dressed up again and continued our tradition of going downtown to eat pizza and check out everyone else's costumes. Unfortunately, after not eating much that day, I made the bad decision to take a vicodin on our way downtown because the joints in my legs were really bothering me. When my friend RK had a costume/wardrobe malfunction that required me to kneel down and help her with several safety pins, I got dizzy and ended up throwing up all the meds before dinner. But I felt better after that. I ate a few pizza crusts, checked out the crazy people that is a Boulder Halloweeen, and went home early.
So, you see, maybe it's no wonder that I only lasted until 1pm on Wednesday this week after that weekend. Maybe it's no wonder that my immune system is a little extra compromised this week. I'm not saying that it's ok for my sick classmates to cough on me or anything - just that maybe I had a little something to do with it too. (Though heaven forbid I have a fun weekend.)

Sorry for contributing to the hork :(

RK: You didn't contribute to the hork. It was my own damn fault for taking meds when I knew I should have eaten something first. really. My bad. ~;o)