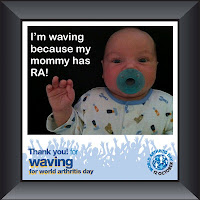 Now that OZL and I are starting to get into more of a routine, I'm starting to get back to blogging and my arthritis awareness and advocacy work - at least a little bit! And OZL has been helping me out.

For starters, here's the picture that we submitted to the World Arthritis Day waving campaign! The campaign is trying to collect photos of 100,000 people waving by World Arthritis Day, which is October 12th. Waving may be a small physical activity, but it's a big gesture of support for people with rheumatic and musculoskeletal diseases. So if you haven't submitted a photo yet, you should upload one here! It's really easy to do. And there aren't very many photos at all submitted from the United States - so we should change that!

OZL has now actually been in two photos for the campaign, because on Thursday we went down to the Denver Arthritis Foundation office for the volunteer appreciation lunch and he was in the photo with all the volunteers. It was really nice to see my friends at the Arthritis Foundation - and we're looking forward to seeing them again at JA Family Day in a couple of weeks. I'm also looking forward to a chance to see some of the kids that I missed since I didn't get to go to camp this year.

In the meantime, things are going pretty well around here. OZL is 10 weeks old now and doesn't cry as much as he used to and sleeps much better. Breastfeeding is going awesome and I'm continuing to pump and stock up as much breastmilk as I can in the freezer. And OZL smiles now, and (allow me to gush like only a mother can) his smile lights up the whole room.

My RA is...okay. Despite the prednisone I always have a lot of trouble with my hands and feet in the mornings. The first diaper change after APL leaves for work is a tricky one - and sometimes I don't bother putting any clothes on him in the mornings to avoid all those tiny snaps. My ankles have also been really tight, so getting down the stairs to get myself breakfast, especially while carrying OZL, has also been a challenge. But the good news is that the major soreness usually wears off after I have been up for a few hours. So, for the time being, we're hanging in there!!