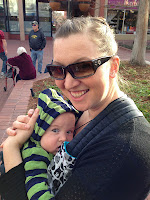 Remember when this happened? Well the other day it happened again. I was at my sister's apartment and we were making dinner. We were listening to music, but then decided to put Funny Girl on instead. I sat down on the floor in front of the TV to put the movie on and then got back up - no problem.

But as I walked over to turn the music off suddenly my knee gave out and I was on the floor in tears. Just like last time. Only this time I was carrying OZL when it happened.

Luckily he was strapped to me in the BabyHawk, so I didn't drop him or hurt him or anything. But he did get pretty scared as we fell to the floor. My sister rushed over and took him from me and he calmed down in a minute or two. And with some ice, some rest, a knee brace, and lots of advil my knee is doing ok too. It still hurts but I can walk on it and everything. So everyone is fine.

But it is a little scary to think about the what ifs. What if this had happened when I was carrying OZL down the stairs? What if I had been alone? Or in the grocery store? What if I had dropped him or he had gotten hurt?

I guess it doesn't help to get to freaked out over things that haven't happened. Things that hopefully will never happen. But it does make you think. Being a parent means being as careful and prepared as you can be, but it also means being ready to deal with the unexpected. I guess being a parent with arthritis just makes things a little bit more unexpected.

Labels: Pain in the Knee, Parenting

Oh, M! I'm so so sorry, for you knee, for your pain, for your fear with OZL. In my opinion, there's something particularly terrible about knee pain. You can take measures to avoid using, say, your elbow, but your knee... that's a tough one. I love you. I'm praying for you! ...and sending you good vibes and wishes, too.

I understand your fears and it has happened to me when my son was younger. (My left knee still gives out. Luckily my little guy is too old to be carried.) Like you, a serious fall holding my son was my biggest fear but as he got older and heavier, I was not able to pick him up anyway. He was either in a stroller or someone else would carry him. Don’t worry yourself so much about this. After it happened to me a couple times, I learned to be more aware of my balance when holding him and you will likely start to be more aware. Things will be fine and your little guy will grow up pretty fast and he will be just fine. Hugs to you. - Lana