No, Seriously, I Can't Make This Stuff Up 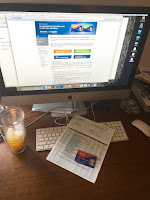 The bill for $6,044.81 for my first Rituxan infusion is still sitting on my desk. After an unbelievably ridiculous amount of effort last Tuesday, I was finally able to ascertain the fax number that I needed to send in my Explanation of Benefits. (NOTE: If you are a Rituxan patient and need to fax your EOBs before you can use your co-pay card, let me save you several hours of your life: the number is 888-332-9864.)

APL helped me fax the EOBs last Tuesday. Since then, I have tried several times to pay the bill but I keep getting the error that my card has been declined. So today I finally bit the bullet and called the Rituxan Co-Pay Card Program back. I pressed the secret 0 key and was immediately transferred to a very nice human, which was great.

I asked him why my card was getting declined and he told me that it was probably because they were trying to run it for more money than was on the card. He told me I would need to let them know the exact amount on the card and not run it for more. Ok. That makes sense. My bill is for $6,044.81, but I know the card will only cover the cost of the medication itself. I expected to be left with a couple hundred dollars of administration fees (which still isn't awesome but it beats six grand!) So I asked him: exactly how much is on the card so I can make sure they charge the proper amount?

I'm sorry....what now? Like I said, I expected to have to pay a couple hundred dollars - not more than $5,000! No, I am not ok with being responsible for that amount!! Not at all!!

While I wanted to scream and throw the phone at the wall, the guy I was speaking to was being really nice. I know none of this is his fault. So I asked him, as politely as possible, if he was sure that was the correct amount. I told him that I was expecting the co-pay card to fully cover the cost of the medication itself, and from the paperwork I had in front of me that should be over $5,000.

And he said "It does look like we may have just loaded the card incorrectly."

Then the representative disappeared for a while to talk to someone else. To his credit, they fixed the situation quickly. He apologized, said it was their mistake, and that my card would be loaded with $5,605.26 and I should be able to use it to pay that amount within half an hour.

So don't get me wrong: I am beyond grateful to have $5,605.26 of assistance towards this ridiculously large bill. That's money I definitely don't have. This co-pay card helps me gain access to a medication that I am cautiously optimistic about. Maybe it is going to help me feel better and be a better mom to my kids and a better wife to my husband. I know I am still responsible for about $450 of that bill, which is not a small amount of money, but we are lucky that we can hopefully stretch our budget to accommodate that amount.

But when you call the Rituxan co-pay card program, the first thing the recording tells you is "we provide fast and convenient co-pay support to eligible patients." My experience thus far has been anything but fast and anything but convenient.  If I hadn't identified that mistake what would have happened? Continued bills from my doctor? Continued inability to pay for it? Collections agencies?

I just don't understand why "help" has to be so difficult to come by.