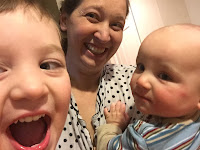 I was diagnosed with RA in June of 2008. It's so hard to believe, but seven years have passed since then!!

This year, the most important thing that happened was that I survived my second pregnancy and gave birth to my beautiful second son, CZL. It has been a whirlwind adjusting to being a mom of two little boys!

I weaned my little guy after nursing for three months, which was still really hard even though I expected it this time around.  After CZL's birth, I went back on methotrexate for the first time in four years. Eventually I realized that the Enbrel wasn't working as well as it used to, so I tried Orencia and then switched to Rituxan, which I am currently cautiously optimistic about.

This year I did a lot of advocacy and awareness work. I participated in the Joint Decisions Empowerment Summit and visited the American College of Rheumatology Annual Meeting in Boston. I also attended the HealtheVoices conference in Jersey City and I worked on a biosimilars bill that was passed into law in Colorado. I started the Facebook group Mamas Facing Forward to help support mamas (and mamas-to-be!) living with chronic illnesses.

I was also active in the press this year! I was interviewed for Medical News Today, the Washington Post, the International Business Times, the Denver Business Journal, the LA Times, USA Today, and CBS Denver. I started the Facing Forward series on my own blog, sharing the lives of others living with arthritis and other invisible illnesses.

My little guys keep my life interesting every single day! In addition to being the best mom I can be, this year I also hope to continue developing my support resources for mamas living with chronic illnesses. I also hope to be able to continue making a difference for the RA community.

From This Point. Forward!!