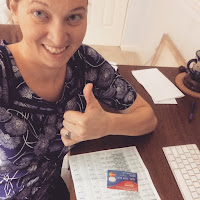 Guess what? It turns out that someone somewhere does actually care about suggestions for making patient's lives easier!!

Today I had a very nice and productive phone conversation with the product manager of the RA Copay Assistance Program. I thanked her very much for providing patients with this wonderful financial support, which makes otherwise inaccessible medications a possibility for so many. But told her honestly that I have had quite a few issues when it comes to making use of their support program. I asked her if she would be the right person to give some feedback and suggestions on how to reduce the burden of the program on chronically ill patients. She said she would love to hear my input.

First, I told her that the automated system on the phones could be much improved to make it easier and more efficient for patients to navigate. Specifically, patients should be informed that there is an option to access a representative directly, without having to spend 20 minutes answering 20 recorded questions. This is particularly true for patients who have already answered all of those questions when they originally applied for the card.

She responded that I would be happy to hear that the entire phone tree system was being re-vamped, and that the new system was expected to launch as of the first of the year. I told her that sounded great and was much needed.

Then I moved on to the information provided to patients on the program's webpage - specifically under the FAQ section. I suggested that this system could be improved to include substantive information that patients could easily reference to make this process slightly more simple. Though the FAQs currently specify that patients will need to provide EOBs to have their card funded, the current site provides no instructions whatsoever on how to do so. The appropriate fax numbers (i.e. the real one given to me by the representatives on the phone) and the address for mailing should be listed clearly as options on the website. Also, since as I just discovered there is a possibility that EOBs provided by certain insurance companies may not have sufficient information, patients should be warned that additional documentation might be required. Advanced notice of what may be required from us can help us budget the appropriate amount of time to deal with these issues, as well as reducing our frustration with the process.

She responded that they had received similar feedback from others, and that the website - especially the FAQs - was also being re-vamped. The website with this updated information is also expected to launch as of the first of the year. I told her I was really glad to hear that.

Lastly, I explained that the requirement to fax documents is really an additional burden on most patients, as very few people own fax machines anymore. That leaves most of us sending potentially sensitive medical information through commercial faxes - or in my case my husband's office - which is also not a very private location for us to receive responses. I told her that the supervisor I talked to yesterday also told me that all faxes are received and filed digitally, and most of us are getting the EOBs digitally, so printing and faxing was really an unnecessary step. I asked if they would consider some sort of system for us to submit EOBs electronically?
Unfortunately, it didn't sound very likely that there would be an option for patients to submit EOBs electronically any time soon. However, she did tell me that most doctors do have the means to do so through a secure portal. I told her that, if that is truly the case, perhaps the FAQs should include that information so that patients will know that they may be able to ask their doctors for help. She seemed to agree with that idea.

Ultimately she told me that they had gotten a lot of feedback like mine, that they were working on a lot of the changes I suggested, and that I should look for the updates after the first of the year. I assured her I would and thanked her for taking the time to listen to my feedback. In the meantime, I told her I was waiting for my doctor's office to mail me the Claim 1500 form and that hopefully I wouldn't encounter any more problems when I faxed it to them. She said she hoped so too, and told me to hang on to her direct phone number in case I do come across additional issues.

I have to admit that this conversation did help restore my faith in humanity, at least a little bit. It was nice just to be heard and validated on a subject that has obviously caused me pretty intense frustration. I am honestly not holding my breath, but I am cautiously optimistic that we will see some improvement in this system in the new year.

And if there's one thing I've learned from all this angst? Give feedback. There's no guarantee that anyone will listen to you, but if we don't tell them what's wrong they won't know to fix it.

I am so happy you got someone to listen and respond to your feedback. So many times "customer service" is more "customer roadblock". I hope this works out. I know how important that financial assistance is. Wishing you and your wonderful family a happy (and healthy) holiday season!