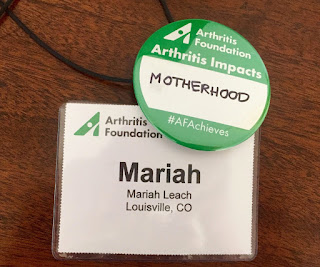 Michael Ortman, Arthritis Foundation Board Chair, set the stage for the Conference by placing an empty chair next to the podium and reminding everyone that the Foundation always needs to be serving the patients who are actually living with arthritis - and their families. President and CEO Ann Palmer shared the results of several Arthritis Foundation studies conducted in the last year, emphasizing the reality that arthritis is more than just physical pain and highlighting that these other impacts also need to be addressed. The speakers worked to inspire the audience to raise the bar for future advocacy and fundraising efforts.

Unfortunately, I wasn't able to attend the Evening of Honors, so I missed seeing my good friend Colleen Ryan being awarded the Charles B. Harding Award for Distinguished Service to the Arthritis Foundation. Colleen's daughter (who is now in college) was diagnosed with juvenile arthritis at the age of 3, and since that time the Ryan family has worked tirelessly to support people living with arthritis. Their fundraising team is The Princess Parade, and Colleen's husband was the one of the wonderful friends who so graciously set up our tent every evening as I struggled through this year's California Coast Classic. (In fact, it was through Colleen that APL & I originally learned about the CCC). The award is highest that the Arthritis Foundation gives to volunteers, and it could not have gone to a more committed and deserving person. Colleen is someone I look up to as a mother and a leader, and I'm truly honored to consider her and her family among my friends.

I did get to return to the Conference the following morning to hear from the Arthritis Foundation's Senior VP of Scientific Strategy, Guy Eakin. He explained that the Arthritis Foundation's scientific strategy is driven by patient voice and feedback. He also provided an overview of four bold initiatives going forward: (1) cultivating a new generation of rheumatologists, (2) advancing osteoarthritis treatment, (3) conquering childhood arthritis, and (4) improving quality of care from the patient's perspective.

After some round table discussions (where I learned about some Arthritis Foundation resources I hadn't previously known about - more about that in a future post!) I was able to stay for the "Recognizing our Champions" Awards Lunch. I was honored to get to cheer for some of the amazing people who are raising hundreds of thousands of dollars to help people living with arthritis. I was especially honored to get to cheer in person for the California Coast Classic - the largest Arthritis Foundation fundraiser in the country that raised over a million dollars this year!!

It was very inspiring to see and hear from people all over the country who are committed to improving the lives of people living with arthritis, and I hope that I am able to continue my volunteer efforts with the Arthritis Foundation going forward!

Sounds like a cool event. I share Guy Eakin's priorities. Especially the one about cultivating and training more rheumatologists. There are places in the US where we cannot get to a rheumatologist for months. We have barely enough in the Indianapolis area, but I have a friend in the Springfield IL area, where it took 3 months to get to a traveling doctor (he came from Chicago) and visited every month. She has to travel to downtown Chicago to receive her test results before two months later. goodness, we need to do whatever we can to help out.

Which is not to minimize the other priorities, all are important. This doctor shortage however just seems like the key to others.