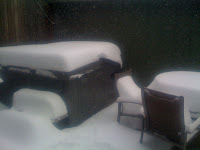 Today my plan was to go for a swim, but I woke up to find that a blizzard had moved in overnight. Still, I made a commitment to go, so I was all ready to pull on my gloves and boots and the dig the car out of a snow bank when I found out that APL had been in an accident on his way to work this morning. Apparently a girl spun out across two lanes and even though APL saw it happen and was driving slow he just couldn’t stop in time. Luckily no one was hurt, but our brand new Subaru is a bit banged up. So that sucks. But I’m glad that APL is ok.

However, since the snow doesn’t seem to be letting up, and I found out that campus has actually closed because of the conditions, I decided not to tempt fate and go out when I really didn’t need to. But I made that commitment to exercise so I rode our stationary bike for a full 30 minutes! A total of 6.6 miles. Perhaps not the hugest accomplishment in the world, but it felt big to me. I’ve exercised so infrequently over the last few months that my legs felt like jello when I was done, but at least I did it! And hopefully the snow will let up enough for me to get to the pool tomorrow.

P.S. The picture is of the snow this morning on our spa and our brand new patio furniture, which we bought because it has been 70 degrees for weeks. Nice enough, we thought, to have dinner outside sometimes...Now there's even more snow on them!

I'm proud of you--hope Austin is OK--and I'm not so sure how I feel about that snow. I never even thought about snow.

Honestly we didn't expect it either! It's been so nice that's why we bought new patio furniture - so we could eat dinner outside! And all this snow fell since yesterday! But the weather changes so much that it will probably be gone by the time you get here...

I'm glad to hear that APL is ok... cars are cars... they get smashed and they get fixed (speaking from experience, I've smashed a few ;-)

I am so glad that APL is okay. Thank goodness!