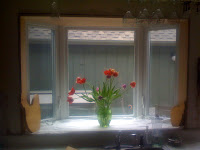 Yesterday, I had a therapy day.

My day started with my first visit to a therapist at the student health center. I have to admit that I’ve never been wild about the idea of seeing a therapist (not just about RA, but in my life in general). But when I was sick and went to see the doctor last week, I guess I seemed pretty discouraged so she suggested I give it a try since it’s covered by my insurance anyways. What did I have to loose? I decided she was right. I’ve been willing to try all kinds of other weird things – fish oil, flax seed, noni juice, green tea, ointments, mindfulness meditation – that I can probably afford be open minded enough to give therapy a try. Not to mention that having someone else to talk to would probably help take some of my unhappiness burden off APL and RK, which I would like.

However, as reluctant as I was to try seeing a therapist, I have to admit that I was even more reluctant to actually admit on this blog that it was a method of treatment I was going to try. I probably need a therapist to help me deal with the fact that I don’t want to admit I need a therapist! But since I’ve felt honest enough to make you guys deal with stories of boob wounds and yeast infections, I guess I should be able to admit that I’m seeing a therapist. After all, this is my story about dealing with RA, and my emotional journey is a big part of that. If you’ve been reading this blog, I’m sure you can tell that I haven’t been the happiest camper for the past couple of months. And, in the interest of full disclosure, my rheumatologist already put me on an antidepressant last semester, so I obviously still need some help.

The therapist turned out to be a really nice young guy and I felt pretty comfortable talking to him. He took a lot of notes but told me that none of his notes were secret – that I could see his notebook any time I wanted – which I liked. The first session was more just getting to know me and my problems, so he asked some questions and didn’t provide too much input. I’ve scheduled another session and I’m going to try it with an open mind.

After that therapy session, I rewarded myself with some more enjoyable therapy. I started with boyfriend therapy and had a lovely lunch with APL. Then I moved on to some retail therapy and went shopping for a dress for my friend AJ’s wedding in May (but sadly I did not find one yet…). Then I had some massage therapy, which I hadn’t done in a while and actually managed to make my body feel a little bit better. I finished the day off with some Scrabble therapy – playing my favorite board game with some great friends – and I even enjoyed it when APL kicked my butt at it!

So maybe therapy isn’t such a bad thing after all…

I want to go shopping with you! Heck, I could probably loan you a dress. I wish we could be within walking distance of each other's closets again. Not that you ever snagged my pastels all that much, but I certainly do miss your fishnet arm warmers. :)
PS-- Did I mention that my shower on Saturday came complete with a riding crop? You need to meet my friends... :)

Congrats on your big step towards therapy. I felt the same way. It took me forever and a half to drag myself into that office, but it wasn't so bad once I actually got there! I hope it is able to help you!

Also, I totally want to play Scrabble with you! I love that game. I never really get the best points because I value finding funny and/or dirty words more worth it than points! jaja :)

PS. I also have a tendency to only find words in Spanish. Boo! jaja!

Scrabble is like a contact sport in my family - both sides. My dad tends to put down words that no one has ever heard of and claim "it's a legal term" so I went to law school just so I can prove him wrong! ~;o)

jajaja! It's nearly impossible to get my family to play, but when we do curse words are allowed, we can't help it! jaja.
Your family uses legal terms, mine uses profanity :).

PS. My word verification is gradho. Is blogger calling me a ho?