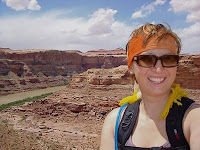 One year ago, I was finishing my second year of law school. While I was trying to prepare for finals, I noticed some pain in my left foot. I had been so busy all semester that when I tried to think about when the pain had started, I found I couldn’t actually remember. I did, however, remember having once dropped a flag stand on that foot. Maybe the toes had been broken and healed funny, I reasoned. Maybe that was why my foot was hurting so much. As I continued to try to study and write my outlines, I also found that I was feeling really tired. But what law student isn’t tired during finals? I just tried to ignore it all.

But eventually the pain in my foot became distracting and my exhaustion was limiting my ability to study, so I gave in and went to the doctor. As for my foot, the doctor did some x-rays and sent me to a podiatrist, but neither could figure out why my foot hurt so much. So I settled for taking some Aleve and ignoring it. As for my exhaustion, some bloodwork showed that I was severely anemic. That was what was causing the exhaustion, they told me. Take these iron supplements and you will be fine.

So, about a year ago, I followed their advice and finished finals. As I was taking my exams my fingers started to hurt. But I just assumed it was from overuse, as I was spending hours and hours in front of my computer preparing outlines, writing papers, and typing exams. The finger pain would go away when the semester ended, I reasoned. It never occurred to me that all these problems could be related.

After school ended, I went to Portland for my little sister’s college graduation. I found that the traveling really exhausted me. One morning I even got sick right into my napkin at the breakfast table. I assumed it was the exhaustion from finals and from being anemic. I figured if I kept taking my iron supplements I would be feeling better soon.

After I came back from Portland, APL, RK, and some other friends and I took a big group camping trip to Great Sand Dunes National Park. It is absolutely one of our favorite places to go in the summer – like the beach at 8,000 feet. There are enormous sand dunes snuggled right up against the Rockies, and a river flows by the front of them, mostly underground, making it shallow enough to wade in. It also happens to be River’s most happiest place on earth – sand, water, running, playing – she thinks life can’t get any better than that! We spent the weekend with our friends climbing the sand dunes, drinking beer, cooking over campfires, and wading through the river. It was a lot of fun but I found myself exhausted and headachy through the whole thing. I blamed the anemia and the stress of the end of the school year and maybe the altitude. While my friends climbed to the top of sand dunes, I settled for laying on a blanket in the shade.

At the end of May I went on a canoe trip with my dad, my sister, and some other members of my family. It was a gorgeous trip on the Green River in Utah, which flows through some of the most interesting and beautiful canyons you’ve ever seen. Though it was weeks after school had ended, I was still feeling really exhausted. I continued to blame the anemia, though I had been taking large quantities of iron supplements for weeks. Although I have always been quite athletic and I’ve always enjoyed canoeing, while we paddled down the Green River for five days it made my everything hurt. I could barely grasp my fingers around the paddles, my shoulders were burning, and even my toes and knees hurt. I chalked it up to not having done much with those muscles in a while. Besides, everyone else on the trip was sore too – canoeing can be a lot of work. I wasn’t more sore than anyone else, I told myself.

Shortly after the canoe trip, I drove from Colorado to Los Angeles, California, where I grew up, to spend some time with my family. I stayed at my mom’s house, determined to catch up on sleep and kill my exhausted feeling once and for all. My mom made us lovely dinners and we did a lot of relaxing together. But as hard as I tried to ignore it, I wasn’t getting better – I was getting worse. My knees swelled up to the size of grapefruits and hurt so much it was difficult for me to walk.

As soon as I got back to Colorado I went straight to the doctor. With all the symptoms beginning to add up, the doctors ran a lot of tests on me and I was given my diagnosis of rheumatoid arthritis last June.

I’m only 26 years old, but to be perfectly honest, a very large percentage of the last year of my life has sucked. A LOT. I’ve been exhausted and my ability to travel is much changed. I’ve been so exhausted that I felt like I needed to invent a new word to explain it: cryierd. Though I finished a semester of law school with RA, I had a great deal of trouble focusing and a lot of trouble sleeping. The stress and exhaustion led to anxiety dreams, lots and lots of anxiety dreams.

My hands have hurt and stopped me from sewing and using chopsticks. My feet have hurt over and over again, which has kept me from doing things I wanted to do like snowboarding and going to the Obama rally in Denver before he was elected President.

I’ve had shoulder pain and jaw pain and headaches and colds and cold sores that wouldn’t heal and rashes that have gotten infected and required cutting, draining, and my first-ever stitches. I’ve spent hours fighting with student health and dealing with insurance paperwork. I’ve been sad, I’ve been grouchy, and I’ve even been depressed.

But even with all of that I hope that most of the time I am able to maintain a good attitude. Just having a diagnosis at all is really good news, because it allows us to try to figure out how to fix the problem. And I know that I have to be patient because the process of trial and error is a slow one. Despite all the horrible stuff that has happened this year, there has also been some good stuff. For example, despite the pain and trouble my knees were initially giving me last May, making it hard to even walk, I haven’t had any trouble with my knees since I first went on RA medication.

I have my bad days but I also have my good days. I’ve managed to go hiking, swimming a few times, bike riding, even running. I’ve discovered the fun of a gluten-free lifestyle and the joy of helping others with their gluten-free journey.

I’ve realized just how lucky I am to have my little family of APL and River, especially APL. I’m also lucky to have the support of the rest of my family and my siblings. And I am super lucky to have an amazing friend like RK and all my other friends who have supported me this year.

However, while I really am trying to keep a good attitude about the progress I have made this year, I can’t help feeling like it isn’t quite enough. I know when people ask they really want to hear me say that I'm feeling a lot better, but that isn't exactly true. My feet have been hurting more this week than they have in a while. I’ve still been having trouble sleeping and I’ve been constantly waking up with headaches. I feel exhausted a lot of the time and now I think I have the extra mental feeling of being exhausted of being exhausted.

I do want to thank everyone who has been reading this blog and showing their support. This blog has been really useful for helping me figure myself out, and I really appreciate you taking the time to see how I’m doing. But sometimes I can't help but wonder if I really have come as far as I could have in the past year. I want to be proud of my accomplishments, but I still wish I was feeling a lot better, and sometimes I get pretty discouraged about all this. I mean, if I've only made it to this point in a year, how long will it take until I can say I feel good and happy and healthy again?

I guess only time will tell.

You've shared yourself and given others (like me) courage when the RA gets hard to handle...

You rescued someone's dear companion from the icy water...

You've helped others set a course for gluten freedom by sharing what you've learned...

Your family and friends (and I dare say all the readers of this blog) are PROUD of you!

Thanks. ~;o) I'm sure you know that some days are harder than others.

You really DO keep a good attitude. A great attitude, in fact. Considering all you go through every day, I am consistently impressed with your ability to stay positive. It may just be how infrequently I see you (way too infrequently), but I commend you on your attitude and willingness to just keep trying. I do hope that a good management program can be found for you, but in the meantime--you could complain a whole lot more to me, and I wouldn't mind a bit. If you need to vent.

You have done so well this past year. You should be proud!