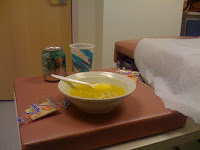 Yesterday morning, I finally called student health and made a same day appointment. APL and I debated the merits going to the doctor pretty much all weekend. Since I have to go during the week, while APL is at work, that means I have to go alone - which takes an awful lot of physical and emotional energy for me. Also, since my symptoms are pretty non-specific right now (fatigue, headache, general body ache), I was pretty worried that my concerns would be dismissed and the visit would be a waste of my time. But, in the end, we decided I was not getting any better so it was time to get checked out.
After calling at 8:00am to make the appointment, I went back to sleep until I had to get up to leave around 1:00pm. I grabbed an apple to eat in the car on the way down there, but I purposely didn't eat anything else. I'm so used to dealing with feeling gross and moving on that sometimes I have a hard time getting doctors to understand (and believe) exactly how bad I feel. I knew I would feel worse from not eating, but I figured that the crummier I felt at the appointment the easier it would be to explain myself. I figured the appointment would last less than an hour and then I could go get something to eat.
Unfortunately, this plan both worked and backfired. Despite my lack of concrete symptoms the doctor seemed pretty concerned about my current condition. She examined me, put in a call to my rheumatologist, and then sent me to get some labwork done. (On a side note: When I got to the lab, I discovered that all the pretty pictures of scenery that had been on the wall were gone. I asked the lab tech what was going on, and he told me he thought my Favorite Lab Man was leaving!!! Noooooooo!!!! On the other hand, guess I'll be leaving student health pretty soon too. And the new guy did a pretty decent job drawing three tubes of blood.)
I didn't get to go home or eat after the blood test. The doctor told me to sit on a chair in the hallway while she waited for the results and to hear from my rheumatologist. So I sat. And I waited. And waited. And waited. And all the while I was feeling grosser and grosser from already feeling gross and from having nothing more than an apple in my stomach.
Finally the doctor checked in to say she was still waiting. At this point, I tried to get her to let me go home, but she said she wanted me to stay. I said I needed to eat something and lay down. But, instead of letting me leave, she had one of the nurses set me up with an exam table to lay on and the gourmet lunch pictured above (small bowl of neon-yellow chicken noodle soup, eight saltines, and a tiny can of ginger ale). But, as opposed to waiting in the hallway, I was grateful. So I ate it and then tried to rest on the short exam table.
What seemed like a trillionty years later, the doctor finally came back in and sent me back to the lab for a urinalysis and another blood test. So I ended up getting blood drawn from both arms yesterday. Then I waited some more. And some more. I asked a nurse if they had forgotten me. The nurse said no, they were still waiting for results. I asked if I had to stay. The nurse said they usually want you to stay when it might be something serious (awesome bedside manner, nurse!) Eventually, my friend RK showed up on her way home from work to wait with me and make sure I was ok. (RK's the best!)
Finally, as student health closed for the night and the janitors came out, the doctor came to talk to me. What she said at this point, to be honest, is not quite clear to me, as I had been at student health for literally five hours and eaten almost nothing all day. But basically she said she was worried that I might have an infection that was causing my fatigue and systemic issues. With the RA and the Enbrel, an infection can be a big problem. But, so far my lab tests had come back clean and she didn't know where the infection was. She said she was still looking for it with the rest of the blood tests.
The doctor also said that sometimes when people take prednisone for extended periods of time, their adrenal glands can essentially stop producing hormones on their own, and this could be part of my problem (a.k.a. I'm pretty sure prednisone is the DEVIL). Somehow, the solution to this is to take a short course of prednisone, which makes no sense to me whatsoever. It also doesn't make sense to me to be taking steroids when I might have an unidentified infection. But, since the doctor said it and she conferred with my rheumatologist and I feel to ill to really fight about it and I really need to finish this semester so I can go ahead and graduate, I'm just doing it.
It was dark when I finally left student health. And I woke up today not feeling any better or having any more answers. I'm not really sure what to do next other than keep resting and try to graduate. So I guess that's what I'll do.

I wish I could watch movies all day with you, or read you your law school readings while you were laying down.

AJ: Movies sound amazing. But, newsflash, I finished law school over the summer!! NO MORE LAW SCHOOL!! Now I'm just finishing grad school, which is both better and worse. ~;o) But it is ALMOST over and damn it I'm going to finish it if it (literally) kills me!!

NESSIE: Thanks for the good wishes. I'm getting there.