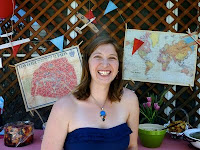 I have so many posts to write about the wedding and the honeymoon - and I will get to those soon, I promise! But, before I do, I need to write this post! Because somewhere in the middle of all the wedding madness, my third RA diagnosis anniversary passed without me even noticing. It seems hard to believe, but I am now 28 years old and it has been three years since I was first diagnosed with RA.
At the beginning of this year I had some doubts about whether the Enbrel was working for me - but ultimately I ended up staying on it. I was on cymbalta for a while too, to cope with depression and frustration over my limitations. This year I have dealt with bad knee days, hand pain, even more hand pain, until eventually I was diagnosed with De Quervain's tenosynovitis in my right hand. The first flare was the most painful, but I still have trouble with that tendon from time to time. For example, I now mouse primarily with my left hand to avoid flaring that tendon.
This year I've continued to deal with fatigue and also still had trouble sleeping, two problems that don't seem to go together but apparently do. I became anemic again and dealt with nasty bruises and hair falling out. I suffered from fevers, common colds (that seemed not so common to my poor immune system), and one mysterious illness the doctors couldn't quite figure out despite many unpleasant tests. And, as probably anyone with a chronic illness can tell you, this year I spent way more than my fair share of time fighting with the pharmacy and battling with insurance, over and over again, to try to reduce the massive amounts of money we spend on medication for my condition.  However, on the good side of health things, after battling for over a year I finally achieved a normal blood pressure!
A lot of other good things happened this year too!! I started pilates and stuck with it - once or twice a week - for the entire year (though I have to admit I haven't been back since the honeymoon. Next week, I swear!) We did our first first Arthritis Walk in December, and raised more than $4,000 for arthritis research with the help of more than 70 friends and family members. I finally graduated from law and graduate school and earned my JD and MS (a task that seemed nearly impossible when I was first diagnosed with RA). We celebrated APL's 30th birthday and, despite being wrapped up in wedding planning, did another Arthritis Walk in May.

As per usual, I also did my fair share of traveling - something I am delighted I haven't let my RA stop me from doing! We visited my sister and her boyfriend in Seattle and I visited my cousin and her family in Ohio. I traveled to Groveland several times for wedding planning and also spent some time in Los Angeles with my family. In April I went back to Los Angeles again for my bridal shower, and then to Seattle again for my bachelorette weekend. And in May we went back to Groveland for the wedding and then went to Spain on our honeymoon (posts about this soon, I promise!)

So what have I learned in the three years since I was first diagnosed with RA? The first year was obviously the hardest, but the second year wasn't a whole lot easier and had major ups and downs as well. Slowing my life down to the pace necessary to live comfortably with my RA has been a difficult process for me. Though I know I have made enormous progress, it is still something that I have to work on every single day.
I know everyone would still like to hear me say that I am feeling a lot better three years later - but unfortunately RA just doesn't work like that. For the most part, I often feel physically the same as I did in the first two years of my illness - fatigued and seriously achy.
However, despite these same physical feelings of pain and exhaustion, I can confidently say that today my life with RA is a lot better than it was three years ago. This is because I have had time to learn about my RA and adjust my life to suit it. And I don't just mean learning about RA in general, I mean learning about my RA - the quirks of my joints, the little signals my body gives me before a crash, what works for pain and what isn't worth bothering with, how to relax and slow down when I need to, which advice to follow and which advice to ignore, etc.
Physically, I often feel the same, but mentally I know I have come a long, long way since that day I got diagnosed three years ago. And that's pretty darn great. So, once again...From This Point. Forward!!