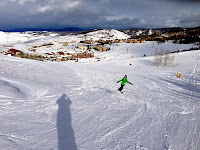 I was twenty-five years old when I was first diagnosed with rheumatoid arthritis. Last Saturday I turned thirty. It's really hard to believe that I've been living with RA for five years now. My life has changed a lot in that time.

For example, I used to be a pretty good snowboarder. I had a season pass to Mammoth and the first year we moved to Colorado we had the Five Mountain Pass. We went as often as we could. And I was fast. And I could go off jumps. And I loved it.

Then I got diagnosed with RA. And I was so, so, so fatigued all the time. Just the thought of putting on all those layers and all that gear and dragging my snowboard to the bottom of the lift exhausted me. I was so achy and sore already that I couldn't bear thinking about something that might make it worse. And I was terrified that I would fall and hurt myself - inflicting some kind of injury on my already messed up joints.

So my snowboard just sat in the garage for the last four seasons.

But last week I got back on it. My amazing mom flew to Colorado to take care of OZL and my amazing husband arranged for us to spend a few days in the mountains for my birthday. He chose a small ski resort where it was less crowded and the lift tickets cost a lot less (so I wouldn't feel pressured to do more than I was ready for). And we went snowboarding for the first time since I got diagnosed with RA.

Putting on all that gear and getting to the bottom of the lifts was exhausting. I was super nervous on my first dismount from the lift and on my first run. I ended up being so shaky and tired from the first run that we had to rest in the lodge for almost half an hour.

But then we took another run and something awesome happened. My body remembered. My body full of crazy, messed up joints and exhausted muscles still remembered how to snowboard! And it was fun!

We ended up snowboarding almost all day. We probably didn't take as many runs as we used to, and we certainly spent more time resting, but we still had a blast. And I wasn't even that sore the next day so we were able to do a few more runs the next afternoon. We're already making plans to try to go again this season.

And I'm pretty proud of myself.

This post just made my day. Go Team Z!

That's so exciting that you got in a day of skiing. Take it all in. I haven't been able to ski in several years but maybe again someday.
Andrew