Pop Goes the Kneesel (YET AGAIN!) 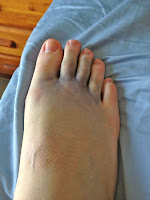 It happened again on Sunday night. Only this time was worse than last time or the time before. Much worse.

I was standing in the kitchen holding a mango that I was going to cut up to give to OZL for dinner. I started to take 2 steps across the kitchen to get a knife, but instead I found myself on the floor in a lot of pain. This time I reached down to my knee and actually felt my kneecap in the dislocated position. And I'm pretty sure I was actually screaming in pain until I felt it pop back into place under my hand. Then I was at least able to breathe a little easier, though I was still in an awful lot of pain.

Luckily I wasn't holding OZL or a knife when I fell. Luckily my sister and APL were both there to help me. They practically carried me to the couch where I spent some time with ice on my knee. Then I took some painkillers and hobbled off to bed. I figured, like the last two times this happened, that I would feel better in the morning. Maybe I would have to wear my knee brace for a couple of days, but I didn't expect anything worse.

But I was wrong. The pain kept me awake most of the night - and sometime around 3am I realized that it wasn't just my knee hurting, my foot was hurting too. By the time it got light I discovered that my foot was completely purple. Somehow in the process of falling I had managed to hurt my foot too. And my knee was still a swollen mess.

Since I can't drive (it's my right leg) and I am having trouble walking, let alone being able to care for OZL, APL had no choice but to take the day off from work to take care of us and drive me to urgent care. We spent several hours at the doctors - primarily arguing about the fact that we do have insurance but we don't have insurance cards yet since APL just started a new job. That was a lot of fun. Eventually, after poking and prodding my knee and foot until I cried, they took some x-rays.

The doctor wasn't positive, but said there may be a small fracture in my foot. Based on the bruising and the possibility of a fracture, he gave me a shoe/boot thing to wear that will keep my foot from flexing while I walk. Luckily there seems to be no permanent damage to my knee. But I do need to figure out what I can do to keep my knee from randomly dislocating itself with no warning whatsoever. So I have an appointment to see an orthopedist on Friday.

Which is a good thing, because last night as I was standing up from a seated position my kneecap almost popped out again. I somehow managed to move my leg or take weight off it or something so it didn't come out all the way, but I felt it sort of...slip a little out of place. And it was not a pleasant feeling. And I'm not loving the broken/bruised foot either.

But I will admit that isn't always easy. Especially when I am frustrated from being in so much pain.

Holy crap, hope the pain goes away soon for you!

Just a note about how you're trying to not focus on the "What ifs" - I did three sessions with a counselor learning Cognitive Behaviour Therapy for pain management. They teach you how to "re-train your brain" to not go to those bad places, or at least try to not go there. Apparently there's been lots of studies where it will actually make the pain and anxiety worse for something that hasn't actually happened. Where you've got coverage, it should probably be covered by your plan if you wanted to look into it. Just something to think about.

Ouch! I'm so sorry. I have been where you are raising small children laying on the floor injured. I had wrist fusion surgeries during that time too. Try and think of the positives, I know it's hard. I'm glad your family is there to support you and I hope you heal fast and your pain gets less.

Have you had your knee checked out? I am sorry that you are going through this. Hang in there. -Lana