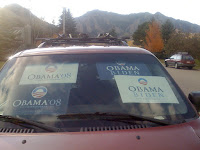 I’m really exhausted today – headachy and tired and just generally feeling pretty icky. But, I have to admit that I am slightly cheered by the act of mild civil disobedience that APL and I have masterminded.

Our HOA (with whom we have had several previous “beefs”) has decreed that a maximum of ONE political sign intended to impact the outcome of the election may be displayed within the confines of our lot, so long as it is smaller than 36” X 48” and gets taken down immediately after the election.

Way to let us express our political feelings there, HOA!! How awesome that we are able to use our homes as we may please to influence the election!!! Apparently, even though we own the house we have contracted away our Constitutional freedom of speech so that the HOA will cut the lawn.

This rule really bugged us – not only because it meant we were forbidden from hanging two (gasp!) Obama signs in our bedroom windows if we wanted to, but because it was completely unnecessary rulemaking! It’s not like the complex was out of control with political signage! Of the 150 units in our complex, I think there were maybe three political signs. Oh, how horrible the complex looked with those three signs!!! It seemed to us that the HOA was unnecessarily legislating on the subject because they wanted to flex their power muscles.

So, of course, I immediately set my law school skills to work reading the fine print of the rule they had written to see if there was any way for us to get around it. Unfortunately there wasn’t – not at least within the lot that our house is on. But the street that runs through our complex is a public street (which the HOA themselves informed us when they were once yelling at APL for parking a truck that turned out not even to be his truck). We never agreed to let the HOA regulate our cars. I mean, I have every right to plaster my car in bumper stickers and park it on a public street. Thus I have every right to fill my car windows with Obama signs and park it on a public street. So we did. With two cars.

This is a double win because (1) we get to show our support for Obama who should clearly win the election (don’t even get me started on how terrifying Sarah Palin is!!) and (2) hopefully it will annoy some of the power hungry HOA board members. And that makes me smile at least a little. Guess it’s the little things that keep you going…

P.S. Just in case you’ve been living under a rock, you should really check out the SNL sketches featuring my favorite Alaskan governor. They are hilarious yet terrifying, because half the time they are literally quoting words that have come out of Sarah Palin’s mouth.

Awesome! Loopholes are the best! Yay for Obama and No on 8!

Have you heard about CO 48? They are trying to amend the CO constitution to have a legal "person" exist at the moment of fertilization. The horrible consequences of giving legal personhood to a fetus at the MOMENT of fertilization are ASTOUNDING. You could ban abortion of any kind, even when the mother's life is in danger. The morning after pill would be history. I think certain types of hormonal birth control could be attacked too. HELL NO!!

Woah! CO 48 sounds totally terrifying. I hate that "the right" preach less government, but really it's all more government in our lives making our decisions for us. I can't take it anymore. Seriously, what is wrong with people?!

Yes, it is more than mildly terrifying. GET OUT OF MY UTERUS!!!