For our honeymoon (in Spanish luna de miel, literally "moon of honey") APL and I went to Spain! We flew in to Madrid and spent one day touring the Reina Sofia museum (which was our favorite) and another at The Prado. We also enjoyed exploring the park and had an amazing diner at a restraunt we found on Yelp that ended up being just blocks from our hotel.

From Madrid we took a train to Granada - a beautiful old city. We saw a flamenco show, toured the Alhambra (an old Moorish palace) and enjoyed walking around the city - even in the rain! (Let me tell you, the rain in Spain does not stay mainly on the plain!) We had dinner and a hookah at an amazing Moroccan restaurant and visited an Arabic bathhouse. We also took an olive oil tour, where we tasted five kinds of olive oil and learned a lot!

In Granada we picked up our car and drove to Gibraltar - where I met a baby ape! From there we drove to Tarifa. The next day we took a ferry to Tangiers and spent the day in Morocco, where we got to sit on a camel, see a snake charmer, and got cornered by a rug salesman who was extremely intent on selling us a rug. The next day we went whale watching in the Strait of Gibraltar and we saw a mama sperm whale and her two calves. Amazing!! 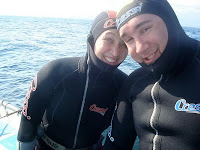 Then we went SCUBA diving in the Strait of Gibraltar - and we needed full wetsuits because the water was cold. We saw an electric sting ray, a moray eel, and did our first wreck dive over an old shipwreck. Then we drove to Jerez, where we got extremely lost - despite having a map and a compass - because there were no street signs in the whole city! Eventually we did make it to the Tio Pepe Bodega (winery) for a tour and a tasting.

From Jerez we drove to Sevilla, where we also got lost and ended up having to park our car and walk to find our hotel. But Sevilla is a beautiful city - with lots of sidewalk cafes to drink cerveza! The next morning we went for a flight in a hot air balloon, which was a really incredible experience. We also went to another Arabic bathhouse - this one had entire rooms full of water! 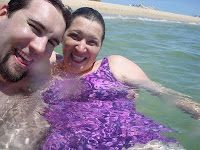 Then, since we still had a car and we had an extra day, we drove to Portugal. In a little city called Tavira, we got on a ferry that took us out to a barrier island for some time at the beach. The next day we took the train back to Madrid and had dinner with some friends. Then we flew back to Los Angeles, picked up River, and drove two days home to Colorado.
It was a truly amazing trip - but we are all happy to be home!!

WOW! What a spectacular trip!! So glad you seemed to have a blast on your trip!!

DEB: Thanks! It was pretty awesome! And only minor disasters, no major ones!! ~:o)

(Also, I've been trying to comment/see pictures on your photog's blog to no avail. I'll keep trying, though! Pictures are expensive. ;) )

NESSIE: Someone else had the same problem with our photographer's blog - which is a pity. Here is the direct link to our post: http://patrickpike.com/2011/05/austin-and-mariah---backyard-wedding-in-groveland.html

NESSIE: I also just added a link to this post that goes to the FB album with pictures from our family and friends. Obviously not as professional but many are equally good!