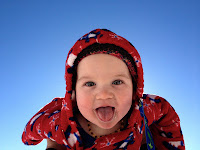 That sentence feels like a totally crazy thing to type considering all the wonderful things that are happening in our lives right now. Last weekend we were lucky enough to be invited on an amazing trip to Winterpark. We stayed in a beautiful cabin with three other families - a total of four couples, three babies, and three little boys. Plus another couple we knew was staying nearby with their baby, so it was a weekend totally full of friends and fun. We took turns watching the babies so that people could ski, and I got to get on my snowboard again. We ate APL's amazing chili and talked and laughed until our bellies hurt. The next day we took the kids and babies to the local rec center where there was a waterslide and a lazy river and we had a fantastic time swimming and taking pictures with my underwater camera. It was so much fun and I feel totally blessed to have found such wonderful and supportive friends.

Monday was APL's birthday, and we celebrated with a bunch of friends at a local brewery and everyone had a great time. Monday was also the day that APL started his awesome new job. He was miserable at his last job for a very long time, so finding a new one has been a great step up for him. Not to mention the new job comes with a raise, a better working environment, and options for advancement. It's fantastic for our family and APL is really excited about it. And I am so proud of him and happy for him.

But I have to admit that, personally, I am struggling this week. It doesn't help that for me after any wonderful, busy, active weekend comes a few days of feeling like I have been run over by a truck
(the gift of RA!) It also doesn't help that OZL has been waking up early every day this week, well before the worst of my stiffness wears off, so I feel fatigued by the time I've fed him breakfast and the days are feeling endlessly long and frustratingly exhausting.

And while there is absolutely no doubt that APL's new job is better for our family, there are some things that I need to figure out how to adjust to and deal with. The one thing we liked about his old job was his schedule. He worked four 10-hour days, which gave him one extra day at home every week to help me take care of OZL. The new job will be five days a week, and while he will only work 8-hour days, the job is in Denver which adds about a 45 minute commute each way. So he is essentially still gone for 10 hours every day, only now it is five days a week instead of four. Which means I now take care of an 8 month old baby by myself five days a week instead of four.

The main reason this schedule change is a little problematic for me is that I recently accepted a part-time writing job (which I will write more about in a future post). The job is product-based instead of hours-based, which means I don't have to work particular hours as long as I get my monthly amount of writing done. However, when I accepted the job I was counting on having one day a week where APL could look after OZL and I could work. And now I'm not exactly sure when I am going to get all the writing done. I do have a nanny who comes for three hours twice a week, but I don't think that will be enough time for me to get all my work done. So I've started writing while OZL naps (like right now) or trying to entertain him in a bouncer or with some toys while I work. I have managed to get some work done this way, but the downside is that I feel like I am working every second of every day and that I hardly have 30 seconds to myself. I'm actually jealous of APL's commute where he gets to sit on a bus by himself for 45 minutes! In fact, I even feel a bit guilty about taking the time to write this post - even though I know it will help clear my head.

The last worry lurking in the background is the health insurance situation. APL got his new job through a recruiting company, so he is starting off as a contractor working for the recruiting company instead of the actual firm where he will (hopefully) eventually get hired. Luckily the recruiting company does offer a health insurance option for the contract period, but I have no idea whether or not it will cover my expensive meds - we're still trying to figure all that out. Or we can always stick with COBRA from APL's last job for the interim, but that's expensive too. The good news is that we will be covered, in one way or another, until APL gets hired by the firm for real. But my insurance nightmare spidey-sense is tingling. I'm nervous my drugs won't be approved or there will be a delay, and with how I'm feeling already I'm not sure I could deal with feeling much worse. Or I'm worried it will be horribly expensive. Not to mention that we could have to switch doctors and I could lose my amazing rheumatologist or my pediatrician. And when he does get hired by the firm, we'll have to go through the insurance switch all over again. But it isn't clear when that will be - a month? Three months? Six? I am grateful that we will have health coverage one way or another, but I'm just nervous about how it is all going to work out - and how I'm going to end up feeling in the interim.

It seems selfish to say that I am struggling when all the changes that are happening right now are for the better. I will have a happy husband and ultimately life will be much better for our family. But right now I could use some help getting through the transition. Luckily for me, OZL's smile is helping me push through.

It's totally understandable to feel overwhelmed when it appears everything is going great. My husband and I are currently going through something very similar - I'm (finally) 15 weeks pregnant and both my husband and I are struggling with anxiety attacks. The tough thing is, we're not overly worried about being parents, but everything else (work, school, etc) is compounding it all. We're really really happy, but some weeks I feel like I just struggle through. I'm sure you'll figure out a way for everything to get done and take care of your freaking adorable baby boy! Good luck!

Change is hard! Don't sell yourself short by feeling badly about anxiety during this time. Days can be wonderful as well as terrible, so definitely don't feel bad about the anxiety you're feeling over very real things! (Not well said, but I think you know what I mean.)

I've heard that with babies (and life!), the days are long but the years are short. I'll be thinking about you during the long days of early wake ups.

When I worked as a freelancer, I really struggled with feeling like my work day was never done. I think you're wise to be thinking of boundaries for your time (maybe having the nanny come for one whole day instead of two partial days?).

I love you, M! Thank you for your open honesty! And boo to the "please press 7f3" calls the insurance companies put us through over and over again...

The winter months have always been the hardest for me as far as parenting and RA go. When the weather is nice, you can head outside and the fresh air alone does its job to tire that baby out... But in the winter? The days are endless.

My best advice for you is to use your support network however you can. It is HARD to suck it up and tell your friends/family that you need help, but that's what they're here for. Believe me, they WANT to help you.

It seems like you have a lot of friends with babies the same age as OZL -- maybe ask if one of them could take him for just an hour? You'd be amazed at what even a short break like that can do for your sanity.

Above all, remember... It will get better. Preschool will come before you know it and you'll be able to get a couple hours to yourself. You are a strong woman, Mariah and you will make it. I promise.