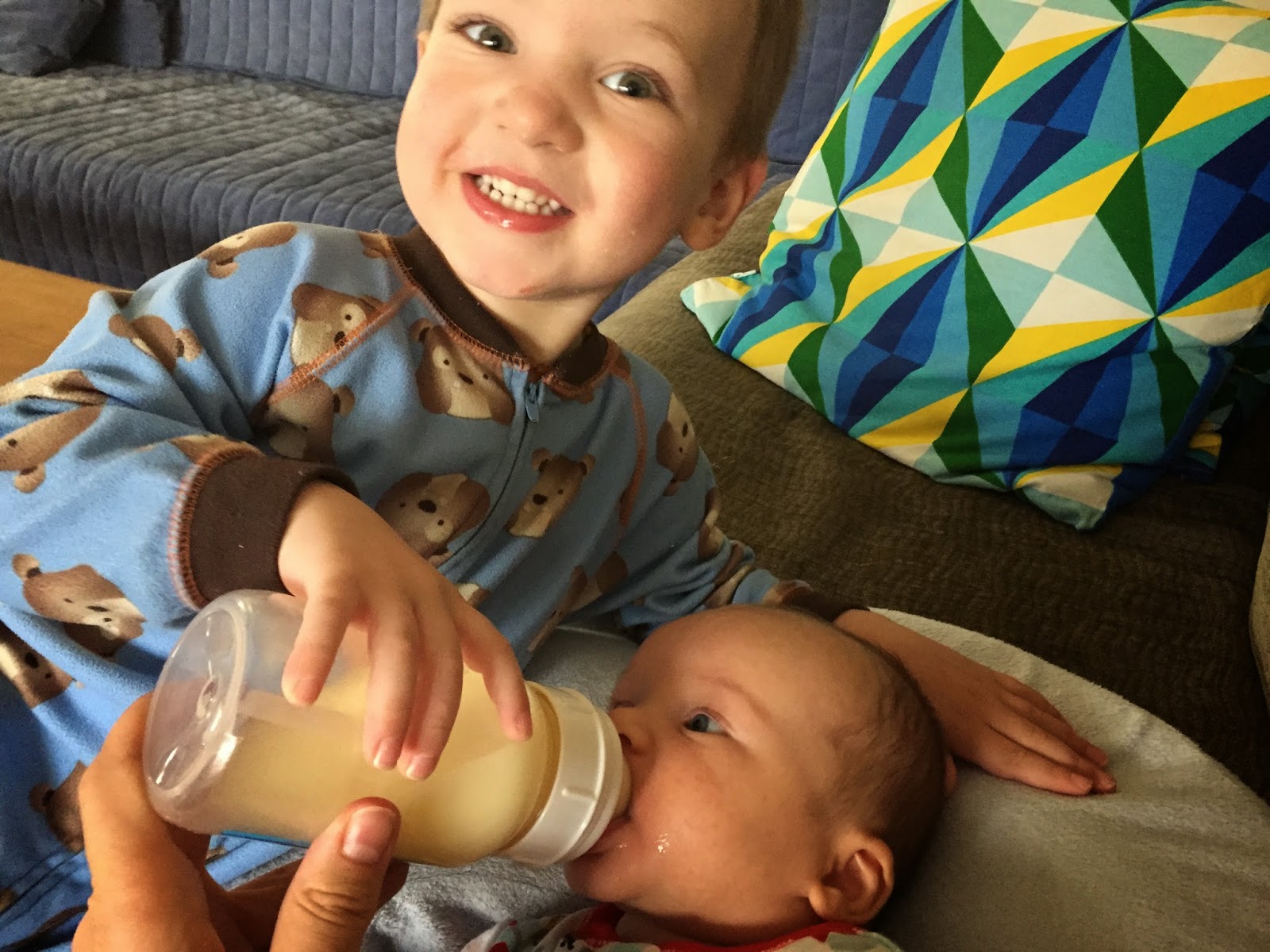 I swear it feels like just yesterday that CZL was born, but little CZL isn't quite so little anymore! He weighs more than 14 lbs and he is almost three months old! CZL is a beautiful, happy little baby and his big brother OZL completely adores him. We are a very happy little family!

But, unfortunately (but not unexpectedly) I am not doing so well. Despite the fact that I am currently taking Enbrel and prednisone, my RA is flaring. Badly. And I am struggling every day with extreme fatigue (being up for CZL in the middle of the night is not helping) and terrible pain, especially in my hands and wrists (which makes literally everything baby-related painful to accomplish). Just like last time, I know it's time. It's time to wean.

But that doesn't really make it any easier.

I have so many mixed emotions right now that I'm not really even sure where to start. First of all, I guess I have to admit to being somewhat surprised over just how emotional I feel about weaning the second time around. I have grieved over a lot of things that RA has taken away from me - my active lifestyle, my career aspirations, the ability to hop out of bed in the morning feeling great...and breastfeeding. I really thought I had already grieved over losing breastfeeding when I weaned OZL. But somehow I find myself grieving all over again. Especially since this has been an incredibly easy nursing experience - CZL has a great latch, I didn't deal with any cracked or bleeding nipples this time, and my milk supply has been fantastic. But even though I absolutely knew this day was coming - and I know from my own experience how much more there is to motherhood after breastfeeding - I still find myself feeling unimaginably sad about weaning CZL.

And I'm honestly struggling a little bit with the fact that this may be the last time I ever breastfeed a baby. We knew that we wanted OZL to have a sibling, so even though I was sad to wean OZL I knew that I would have another chance someday. This time I'm not so sure. I always thought I wanted three kids, but I'm not sure how realistic that is for us. This past pregnancy was extremely difficult for me, and I'm honestly not sure whether I would be able to survive another one. We aren't making that decision anytime soon - I'm going to get my RA fully treated and then we will wait a few years and see how we feel - but it is possible that CZL could be my last baby. And that does make weaning just a little bit harder.

I also have to admit to feeling a little bit disappointed. I stopped nursing OZL so that I could start taking Enbrel again, but with CZL I was forced to start back on Enbrel during my third trimester. So, since he was already exposed to the medication (and the information on safety is better than it was two years ago) I made the decision to stay on Enbrel while nursing CZL. So I think, in the back of my mind, I thought I might actually be able to nurse CZL a little longer than I made it last time since my RA would theoretically be better treated. But, in reality, I think my body is just worn out from dealing with RA that has not been fully treated for four years. Despite being on more meds than I was last time, I am actually struggling just to make it to the three month mark. And that is a bit disappointing.

And then there's some complicated emotions that, although they have to do with stopping breastfeeding, actually have nothing to do with my baby. Like I mentioned above, it has been four years since my RA has been completely treated. I stopped taking methotrexate six months before APL and I got married so that we could start trying for a baby right away. It took us four months to conceive and then I was off Enbrel for a year while I was pregnant and nursing OZL for three months. Then, because we knew we wanted our kids to be close in age, I never went back on the methotrexate at all due to the amount of time it takes to start working + the amount of time it takes to get out of your system. It just wasn't worth it to go back on between kids. And while the Enbrel does help it has never been enough all by itself to control my RA. So, to reduce the overall amount of time I would spend with partially treated RA, we started trying for our second as soon as OZL turned one. But this time it took us 8 months to conceive. And then I was off Enbrel again until my third trimester. And though I am back on the Enbrel now, I'm still having a hard time. Because, all together, it has been four years that I have been living with untreated or partially treated RA. And I think my body is just completely worn out.

But once I am finished nursing CZL, I will have the whole wide world of RA medications available to me. My body will be my own once again and I can do whatever it takes to get me feeling as good as possible. And I am honestly excited about the possibility of feeling better than I have felt in a long, long time. Most of me believes that I will be feeling lots better soon, and I'm excited to have extra energy to be a better mom to my boys.

But there's also a part of me that's a little bit scared.

It feels a bit like going back to square one. When I was first diagnosed, it took a long time to figure out what my "new normal" was going to look like - and even longer for me to accept that "normal" and learn to be happy again. And I have to admit that I am a bit nervous to "rediscover" my normal, if that makes any sense. Because, for the past four years, the fact that my RA has been partially treated has been sort of a handy excuse to keep my spirits up when I wasn't feeling well. I knew things were crummy but I could always say to myself "don't worry! Things will be better when my RA is fully treated! I'm doing this for the good of the family!"

But...what if things are not better? What if the treatment doesn't work like it used to? What if I am still in a lot of pain or dealing with large amounts of fatigue - despite being able to take all the meds? And now I also have two little kids to raise? What if things aren't going to get better? I am trying to stay positive and take things one day at a time - the way I always try to keep looking forward. But I have to admit that, at least sometimes, forward seems a little bit scary.

I just love you. You're cheerful and brave and so very, very human. I understand completely how scary it is to contemplate the unknowns ahead of you as you treat your RA and raise your two lovely boys. But I encourage you to take a deep breath and relax a little. Your kids will love you for the sweet Mommy you are--not the one you think you ought to be. I worried about how my severe RA was affecting my daughter--she was just six when I was diagnosed. Years later, as an adult, she was flabbergasted that I'd worried about it, telling me that as a kid, she simply accepted my RA as part of our lives and never wished I was any different. She loved me just as I was.
I was touched and relieved. And so will you be, Mariah. You're a great Mom. You'll do the best you can--and it will be more than enough.
I hope that being able to concentrate now on getting your meds right so you can feel better will work quickly.
It's all going to be OK. Your boys are so lucky that their Mom was able to breastfeed them at all, even if it wasn't for as long as you would have liked. Because you did, you share a very special bond with them.
Wishing you calm, patience, and serenity...
-Wren

I have very few words and very little advice, but oh so much love and even a few tears.

You're amazing, M! I'm cheering you on from Alabama...