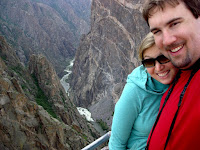 We also went to Four Corners National Monument, which doesn’t get counted in the above list because it is run by the Navajo Nation rather than the National Park Service.

We drove 1,500 miles. Now there are only two NPS sites in Colorado that we haven’t been to. Those are on the list for the next spontaneous road trip!

NERDY UPDATE: We have now been to a total of 77 national sites. I got our passport out and counted!

I. LOVE. NATIONAL. PARKS.
Seriously. My family's latest vacations have been to places like the Grand Canyon and Zion National Park in Utah (EPIC). So underrated. So awesome. I think that national parks really ARE the greatest American export. I'm gad y'all had some fun! I saw this summer where several weekends all the parks are waving fees....!

We LOVE national parks too. ~;o) We have one of those fancy passports where you get the stickers and the cancellations. We also collect the brochures from each place we have been. They are sitting in a box for when I figure out what to do with them someday. I am SO grateful that APL and I have had a chance to experience so much of our country together, especially since there are so many different types of environments.

We buy the National Parks Pass every year because we live 45 minutes from Rocky Mountain NP, his parents have a place 45 minutes from Yosemite NP, and we usually take at least one trip to Great Sand Dunes NP every summer. ~;o)

I loved reading about your spur-of-the-moment trip!! Very cool. I enjoyed reading about your record so far, too. Have you heard that there will be three weekends this summer that entrance to National Parks will be free? The idea is to stimulate the economy in the area, but the NPS needs money, too, so I'm tempted to pay anyway. I am going to check out these places you guys just visited! :-)