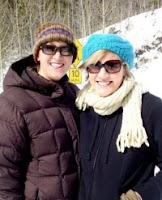 Last weekend my little sister and her boyfriend came to visit and it was like a fantastic mini-vacation for us! We picked them up from the airport on Saturday and drove straight to the mountains, through a snowstorm, to the little mountain town of Buena Vista. (Which, I'm sure all you Californians/anyone who speaks Spanish will be appalled to know, the locals insist on calling: B-yuu-na Vista!)
We had dinner at a fantastic little restaurant (that used to be a gas station) called Global Garage. Then we were happy to discover that it had stopped snowing, so we were able to gaze at a billionty stars while we soaked in some seriously hippie outdoor hot springs. Aside from being a liability nightmare (due to pipes and rocks sticking out everywhere - I think we all stubbed a toe at least) we had a great time in the hot springs.

The next day we played a bit in the snow and then drove back to our place in Boulder. My sister made an amazing curry for dinner. Then, since none of us were interested in celebrating Valentine's Day, we decided to play a board game. This led to the unintentional discovery that the most Anti-Valentines' Day thing you can possibly do is play Risk with your significant other. My sister and her boyfriend nearly killed each other! But it the end it came down to a battle between my sister and APL, and luck was with APL so he took over the world.

On Monday evening, my sister and her boyfriend wanted to go to Casa Bonita. So we went. If you haven't heard of it, it is famous from this episode of South Park. (Skip to -02:51 to see the part where they actually go to Casa Bonita.) No joke - the restaurant is exactly like it is in South Park. I also just found this hilarious "Survivor's Guide" (which maybe we should have read before going there!) that describes Casa Bonita by saying "it's like Disney had sex with Tijuana and left the goofy-looking bastard to fend for itself in a random strip mall on Colfax." Needless to say, the food was awful but we really enjoyed ourselves anyhow!

They left on Tuesday evening and I was sad to see them go because we had so much fun. Wish we lived closer to each other! Thanks so much for visiting us!!

i loved our trip out there!!! i hope i get to see you again soon! twice a year is not enough :(

Next time we move, let's move towards each other!!

This is officially the best Anti-VDay tradition I have ever heard of. Consider it enacted as tradition in this reader's life. -S