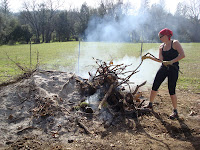 During the week of spring break, APL and I had a few days of downtime on "the farm," where we helped APL's mom with the farm-work. APL shoveled turkey poo manure into the back of the gator (the utility vehicle, like an off-road golf cart) and then distributed it to each of the trees in the orchard. I spent literally two days clearing dead wood from the oak grove where we hope to have our wedding ceremony, dragging big pieces into a pile to be saved for winter firewood and using the gator the haul smaller or rotten pieces close enough to chuck on to the burn pile. Clearing the dead wood will not only help us create a gorgeous ceremony location but also protects the grove from the significant fire risk in the area every summer.
I have to admit that it was a pretty physically difficult job - bending down to gather dead sticks, carrying them over uneven ground to the gator, chucking wood on the burn pile, lugging half-rotten logs out of the weeds that had grown around them. But it was so satisfying to be doing something physically active and outside in the sunshine. It also gave my mind a two day break from the hundred million worries I've been worrying about. And, if I loved that oak grove before, I love it even more after toiling under those trees for two days straight.

However, that being said, I totally crossed the threshold that leads to RA crashing. This is something I still majorly struggle with. Not only do I have a hard time identifying the threshold, but even if I am able to identify it I have an even harder time making myself listen to it if I'd rather not.

I worked under the oak trees, hauling dead wood, all afternoon on Tuesday. By the time we stopped for dinner it was all I could do to eat something before falling into bed. I was exhausted and sore too. But the problem didn't really start until I woke up the next morning actually feeling good. I was still tired, yes, and a little bit sore, but what else is new? I figured if I could work a whole afternoon and feel like that the next morning, I could certainly work a bit more.

But I didn't work a "bit" more. I worked a lot more. I worked pretty much all day. About halfway through the day, I already knew I had done too much, but I didn't stop. Part of it was that APL and his mom were still working, and I really wanted to contribute. But most of it was that I liked the work I was doing. I liked contributing to the place where our wedding will be and I liked the way it freed my mind to just be outside in the sunshine, rather than worrying about assignments and doctor's appointments. I should have stopped, but I didn't. I kept working late into the afternoon. It was like I knew the crash was coming, but it hadn't come yet so I might as well enjoy what good feeling I had left.

But I paid for it. Really paid for it. The next day, I felt like I was going to die. Every joint and every muscle in my body was on fire. My head throbbed and I felt nauseous and dizzy all day. My body was heavier and felt more rotten than any of the wood I had hauled to the burn pile. It took a tremendous amount of effort just to stay upright and behave like a normal human being. I don't think I've ever crashed that hard before. It took several days to come out of that nosedive.

The problem is, though the crash was horrendous and probably pretty unhealthy for me, I'm not sure I regret the two days I spent working in the oak grove. I want to be able to do physical work sometimes. But I do recognize that I should figure out how to limit myself a bit more in the future - to do some work, enough to be satisfying, but not enough to knock me down so hard. However, I think this is easier said than done. And I guess it will be a process of trial and error.

I'm right now in the midst of trying to figure out how much exercise I can take on while I'm off work for a couple of weeks, and while what I'm doing isn't anywhere near as much fun as what you did (enjoying the outdoors and all), it is so great to be moving again. We're made to move, and I'm taking great satisfaction in that.

I'm not sure what the outcome of my little experiment will be (I'll be posting the results), but I think you're right: it's a question of trial and error. Good luck with your own experiments in the future – I hope your fun won't come again at such a high price!

I always over do it too. I still haven't figured out the right amount to go. I totally understand the not regretting it thing. I am glad I am not the only one that feels that way sometimes!

you are tough and i love you!

LAURIE - I am so behind on all the blogs I read since spring break - how's it going with your experiment? Good I hope! I'd like to do a link to your blog in mine soon, if that's ok with you! As soon as I catch up on reading yours ~;o)

KELLY MARIE: I feel like I should regret it, considering how much I suffered for it. But for some reason I didn't. Which is probably why I couldn't stop myself even though I knew I had gone too far. If I'm going to suffer anyways, I might as well enjoy the cause!!!

The experiment is going quite well, although my butt + hamstrings might not say the same thing today after a workout with my trainer yesterday!

Re the link, you bet! I already have one on my site to yours (hope that's OK – didn't even think to ask!).