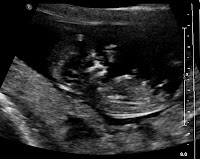 We had our second prenatal appointment, as well as our first trimester screening, a few weeks ago - but I decided to wait to post about it until I was done posting my secret posts so my story wouldn't get too out of order. Happily, all the results were very good!

We finally got to hear our baby's heartbeat, but the very best part was seeing our growing baby on the ultrasound monitor (the regular abdominal kind of ultrasound this time - not the kind they used last time). The thing that surprised us the most was that our baby was moving - and not just a little bit! The kid was practically disco dancing in there!! Kicking off the walls of the placenta, rolling over, waving arms around. Because the baby is still too small for me to feel, it actually didn't occur to me that he/she would be moving around in there, so it was really crazy to watch. Especially because the still picture doesn't really convey how vivid the video was - the video was so clear that we could even see the baby swallowing. It is so weird that the baby can be so very small and still have so many distinct features and so weird that it can be having a party in there without me even knowing it.
Then, after dancing for about 15 minutes and totally thwarting the ultrasound tech's attempts to get the measurements she needed, our baby fell asleep. And what I really mean here is stone cold passed out. Unfortunately, the baby passed out with its hands right in front of its fact, further thwarting the ultrasound tech's attempts at measurements - so the ultrasound tech had to jab me in the belly to try to get the baby to move its hands. It took at least 20 minutes for her to get all the measurements she needed - which was ok by us because it gave us time to stare open-mouthed at the little person dancing and sleeping inside of me.
So. Crazy.

I love ultrasounds!! Isn't it amazing that by the end of the 1st trimester a baby looks like, well, a baby! All the parts are there just in tiny miniature! So very sweet!!!

STEPHANIE: It was seriously crazy to watch. I simply could not believe how much he/she was MOVING AROUND IN THERE!! I think, when this kid gets big enough for me to feel, I'm gonna feel him/her!! ~;o)

I just love this post! You guys must be over the moon happy!

Loved reading your baby adventures. What a cool ultra sound - much more fun then the liver ultrasound I had.
Congrats on baby!!

MANDY: I think there are still more baby adventures to come. ~;o) And, yeah, that was probably the most fun ultrasound ever. Much more fun than my armpit ultrasound too (http://fromthispoint-forward.blogspot.com/2011/11/thank-you-deodorant.html)

Awww soooo cute! I can't wait till my next appt on jan 3rd. I wanna see how much my baby has grown! My fetal doppler came in the mail though and i posted a video on my Facebook of the heartbeat. I just love love love it! Im almost out of the first try now!

SKYE: I saw/heard your doppler video! How exciting!! Hope you are hanging in there!!