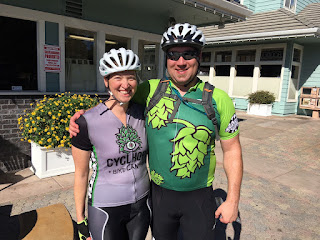 To hopefully avoid the stress I felt from the time pressure on day one, we tried to get moving as quickly as possible on the morning of day two – and pretty much every morning of the ride after that. I knew I was one of the slowest riders out there, so I wanted to give myself as much time as possible to complete the miles. We got up in the dark at 5:30am every day, but even though I was taking extra medication it still took me a while to shake off the morning stiffness. So despite our best efforts, we generally ended up leaving camp in the middle of the pack, and falling to the back of the pack as the morning wore on.

Though I had prepared pretty extensively for the possibility of pain in my hips, legs, and knees, one thing I didn’t really consider was likelihood of pain in my hands. Though, on reflection, it makes complete sense that my hands might be painful and sore after 85 miles of gripping and braking over rough and bumpy roads. I think my hands were also in particularly bad shape due to how anxious I had been on day one of the ride – I was probably gripping the handlebars way tighter than I needed to be.

My left hand was unfortunately worse off than my right, with my two smallest fingers seeming permanently and painfully curled from the intensity of my grip the day before. I awkwardly ate my breakfast with my right hand (I’m left-handed) and then I found some heat packs and tried to get my wrists and fingers moving again. The heat and my morning medications helped, and I tried to make conscious effort not to grip so tightly after that and to try to vary my position on the handlebars and breaks. Nevertheless, even two weeks later as I type this, I am still having trouble with my left hand. 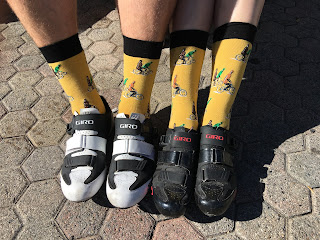 Luckily, day two was significantly shorter than the first day at about 53 miles. It was still longer than any of my training rides, but it seemed far less challenging after my accomplishment the previous day. There was also a lot less climbing, only about 2,300 feet. So there was actually time to stop for coffee, to watch some otters playing under bridge, and to watch a guy flying a parachute over Monterey Bay. I began to enjoy myself a little bit more.

Having been on the tour twice before, I knew that there was a pretty steep hill to climb on the way into camp – but it honestly wasn’t that bad­­. Though we were still at the very back of the pack, we made it into camp a bit earlier and I had some time to rest before dinner. I even managed to socialize a bit after dinner which was really nice. Honestly one of the best things about the tour is being able to talk to other people who are living with the impacts of arthritis – my arthritis family – so it was a bit frustrating on the days when I didn’t have time or energy to socialize.