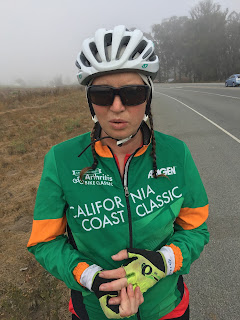 Day six also dawned foggy and cold. My hands were still bothering me a lot, and the cold really didn’t help. Day six was also the day that my swollen lower lip finally broke out in blisters. Later, doctors decided that the lip blisters were due to a combination of the enormous amount of sun I was exposed to, my skin tone, my history of cold sores, and – maybe you guessed it – the immunosuppressant medications I use to control my RA. So I suppose it was really no surprise that the blisters occurred the day after my methotrexate dose. I did my best to keep my lip covered in Carmex, but it didn’t seem to be helping and it only got worse as the day wore on.

The first 34 miles of the ride on day six were like farmland purgatory. At first it was sort of nice – the road was flat and it was fun trying to identify the crops as we went by. Some of them – like strawberries, peppers, celery, and dill – you could identify not only by sight but also by smell. But as we kept riding through fields in a gray fog, zig zagging our way across the valley, it began to feel like we weren’t making any progress. The roads were also extremely bumpy, likely torn up from farm equipment driving over them, which was really difficult on my hands. 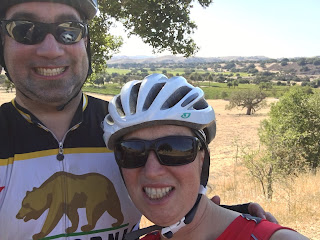 So I was really grateful when we finally made it into the hills, even though that required some climbing. The roads were better and the vineyards were beautiful. But I was still feeling pretty sore overall and exhausted from the methotrexate (not to mention five previous days of bike riding!). I began to run out of steam as we neared the climb that the other riders were calling “The Wall.”

Apparently, however, I hadn’t yet run out of stubbornness, so I forced myself slowly up The Wall literally cursing the entire way. I cursed the vineyards and I cursed bikes in general. I cursed whoever first decided it was a good idea to ride a bike uphill and I cursed whoever thought it was a good idea to do this bike ride (meaning I totally cursed myself.) My lip was painful and bleeding and I was really struggling, but the cursing and APL helped me laugh and keep moving forward. Eventually, I made it up The Wall. 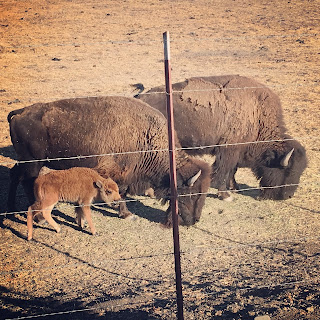 I was rewarded on the other side with a long downhill through some beautiful countryside (though that road was quite a bit bumpier than my sore hands would have preferred). We went past a ranch that had some buffalo and got to see a baby buffalo who had just been born that morning, and that cheered me up considerably. And, after 70 miles and 3,200 feet of climbing, we even made it to camp on time for happy hour and got to taste some local whiskey and beer. And I was upright enough to participate!