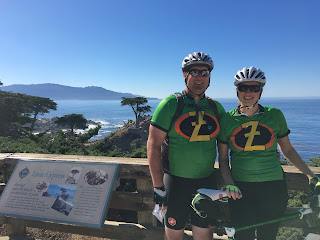 On day three, I woke in the tent (in the dark) with a pretty severely swollen lower lip. I guess the chapstick I was using wasn’t up to the task and so I ended up with a badly sunburned/windburned lip. The swelling went down a bit after I got moving and took my morning medications, but it was the beginning of a battle with my lip that I am still fighting two weeks later as I type this.

Day three may have been my favorite day of the tour – it was certainly one of the most beautiful. We rode around the rest of Monterey Bay and then onto 17 Mile Drive, which was a portion of the route I had never seen before as it requires a pass to drive it. The coastline was gorgeous and we stopped for a few minutes to listen to some sea lions barking and to check out the Lone Cyprus. 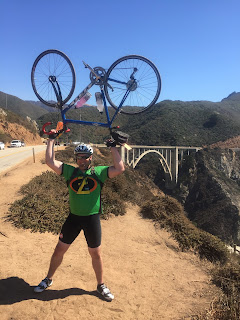 Then we headed into Big Sur and over the Bixby Bridge, which did include a couple of big climbs. But, with a wider shoulder, plentiful turnouts for stopping to rest, amazing scenery, and a little more confidence from the first two days of the ride, I was able to manage the climbs without too much trouble. Though I will admit that the rouge rest stop at the top of the Bixby Bridge climb was a lifesaver for me as it was really very hot that day. The van offered us cold water, ice for my knee, and a few slices of orange, which I think was one of the best things I have ever tasted.

We rode about 47 miles and climbed about 2,700 feet and then stopped about a quarter mile from camp at The River Inn to put our feet in the Big Sur River and have some beer. Sitting in the Adirondack chairs in the river and chatting with other riders was extremely relaxing. I also had an opportunity to soak my sore hands and wrists in the cold water, which seemed to help a lot. 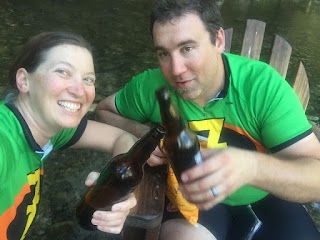 By the time we made it to camp we found that our third Team Z teammate and our friends from Team Princess Parade had already set up our tent. Since they rode so much faster than us and always made it to camp early, they continued to set up our tent every day of the ride after that. Though our tent is really simple to set up, this token of their support really meant a lot to me every time.

On day three we eat dinner in two groups at the Big Sur Inn, so we had some time to kill until the second seating. Based on how good the river had felt on my hands I ended up finding a deep spot near our camp and wading in to my waist. I just walked straight into the water in my sweaty spandex and it felt fantastic. I ended up dunking myself entirely and feeling very refreshed. I extra enjoyed my hot shower that night too!