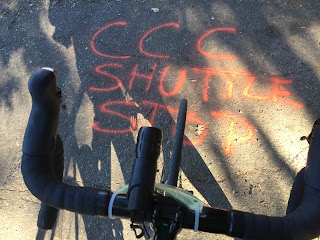 I did finally run out of stubbornness on day seven. I was tired and sore and had a lot of trouble getting moving that morning - and my lip was a painful mess. The day started out with some beautiful back country roads that went winding through the oak trees, a type of California landscape that I truly love, but it also included a fair amount of climbing which didn’t help me move past my exhaustion.

I knew that the route for the day went on to include more climbing, but next part would be along the 101 freeway. Riding near traffic provokes a lot of anxiety for me, especially when the traffic is going fast – which it obviously would be on the freeway. Having driven that section of the route before, I really wasn’t looking forward to riding it. And, after six full days in the saddle, I wasn’t honestly sure that I had enough energy to do it safely. So, after riding 400 miles, we got in the sag van for the first time. 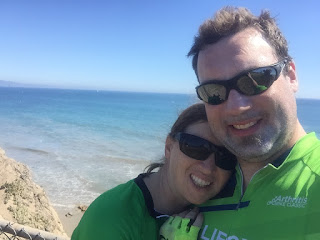 The sag van took us to the first rest stop, where we decided to try riding again. The next section was still along the 101 freeway, but only for a few relatively flat miles – so I thought I would be able to handle it. While I did okay, I really did not enjoy riding along the 101, so I think I made the right call in deciding to skip as much of the 101 as possible.

By the time we made it to the second rest stop, my joints were screaming, my head was aching, and my lip felt like it was going to fall off – and there were still 31 miles until camp. I reluctantly decided to call it a day, and we sagged the rest of the way to camp. (We still rode almost 40 miles that day.) 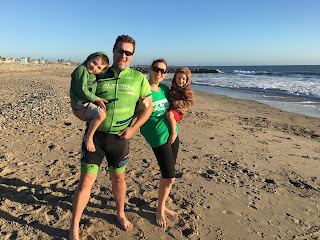 I’m really glad that we decided to sag, because my dad was already at camp when we got there. And my in laws arrived with our boys not long after we did. If we had finished riding those miles, our family would have been sitting and waiting for us until we got to camp in the dark. Instead, we had time to play with our boys on the beach for a bit before dinner, and after a week apart it was much needed for everyone.