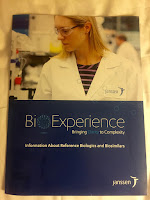 Today I went out to the Janssen Campus in Malvern, Pennsylvania for the BioExperience tour, where we learned about the complexities involved in discovering and developing the biologic medications that so many people living with RA (and other illnesses) depend on. Part of the reason that these medications are so expensive is that an immense amount of work goes into discovering the treatment, growing the proteins from live cells, figuring out how to remove all the impurities, following procedures to make sure the product isn't contaminated, and safety testing the product for patient use. I already knew it was a really complex process, but it was honestly pretty amazing to see in person. 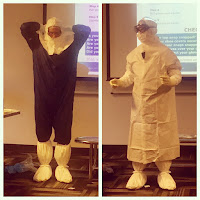 After some general discussion about biologics and biosimilars and the associated policies (including the biosimilar legislation I worked on last year), we saw a "gowning demonstration." One of the scientists demonstrated the layers and precautions that he has to take before entering the manufacturing area. It's a rather complicated process, involving 3-4 layers over every part of the body as well as air locks, pre-packaged & pre-steralized gowns, and alcohol on hands and gloves at multiple times. The full gowning procedure has to be followed by employees who work in the manufacturing area every time they take a break, eat lunch, or use the restroom - they estimated they do it at least 5 or 6 times on an average day. This elaborate process is in place to make sure the medications we inject/infuse into our bodies aren't in any way contaminated. 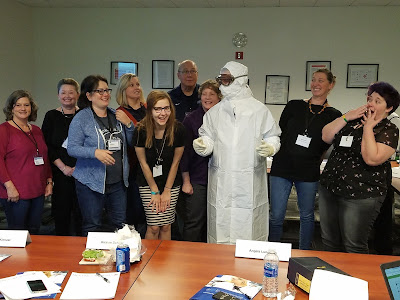 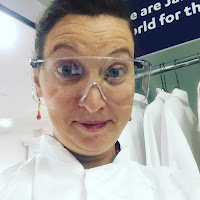 Next we donned lab coats and safety glasses ourselves (far less effort than the full gowning procedure for manufacturing!) for a tour of the various labs. We learned about the development of biologic medications, from a 1ml vial with 10 million cells to growing large quantities of cells in bioreactors to figuring out the best ways to store the product for patient use. My favorite part about this section of the tour was how passionate all the scientists seemed about their work. It's a great feeling to know that such enthusiastic and committed individuals are out there working on treatments for us! 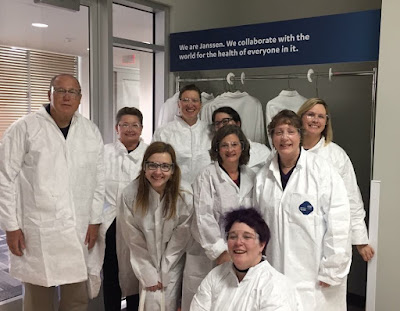 After a very lovely dinner, where I got to chat a bit more with some of my blogger friends and some other folks from Janssen, it's time for me to rest up for the start of the third Joint Decisions Empowerment Summit tomorrow morning! More from this weekend later, I'm sure!

*Janssen covered my travel expenses for this weekend.