Means To An End 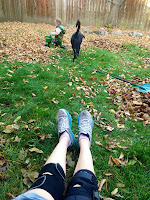 Last weekend the weather was quite nice, so my mom and I went out into the backyard to to start attacking the one hundred billion leaves that were blanketing my lawn. Unfortunately my knees have been in so much pain lately that I found myself wearing double knee braces. And I only was able to do a little bit of raking before I had to give up and sit down.

I tried to remember the last time my RA pain had been this bad. Luckily, this blog is like a health timeline for me, so I scrolled back through my posts until I found the last time I was wearing double knee braces: right before my wedding and then again on my honeymoon.

There was a reason I was in so much pain at that particular time. Although I didn't make it public at the time, when my wedding rolled around I had already been off methotrexate for more than six months. I needed to get it out of my system so that it would be safe to conceive OZL. And although I stayed on Enbrel until I found out I was pregnant, Enbrel alone just wasn't enough to keep my RA completely under control. During the six months leading up to my wedding and the four months it took to get pregnant, I dealt with massive knee pain, excruciating hip pain, and extreme fatigue.

Luckily, I did experience at least some remission during my second trimester. But, by the time I hit the third, I was dealing with a huge pregnant belly and hip pain, hand pain, and major morning stiffness (not to mention a couple pregnancy complications). In the end I was put on bed rest until I hit 37 weeks, and OZL was brought into the world a bit early, which ended up being better for both of us.

I nursed OZL for three months until I reluctantly stopped so that I could start taking Enbrel again. Getting back on the Enbrel made a major difference in my quality of life and ability to be the mom I wanted to be. But since that time I have dealt with flare after flare because I never went back on the methotrexate.

I never went back on the methotrexate because it was too much of a time commitment. It would take several months before it even started helping, plus however long I stayed on it to get the benefit, plus six more months to get it out of my system again before it would be safe to try to conceive another baby. We decided we didn't want our children to be so far apart in age. And, while we probably would have preferred to wait until OZL was a little bit older to start trying for a second baby, in our world the longer we wait the longer I end up dealing with RA that isn't completely treated. Which means I am living with more pain and more fatigue. So, after weighing all of our options, we decided to start trying for baby #2 when OZL turned one in May.

It has been seven months and unfortunately we are not pregnant yet, though I will admit that for at least two months my ovulation lined up so closely with my RA flares that we weren't even able to try. We are trying to remain optimistic, but in the meantime my RA has gotten worse and worse - to the point where I am wearing double knee braces just to stand in my own backyard.

The Enbrel just isn't enough on its own, and over the counter NSAIDs aren't helping. So I finally went to see my rheumatologist yesterday. With my options for medications severely limited by my desire to get pregnant, I agreed to try some prednisone (i.e. Satan's tic tacs). Prednisone and I have a long love-hate relationship. It is wonderful because it usually works great to give me less pain and more energy, but with prolonged use I get almost all of the nasty side effects. A few years ago, after being on prednisone for more than a year, I decided that the side effects were way worse than the benefit and swore never to use it again. But, of course, there are only so many options - especially when trying to conceive.

I know that I need more than just Enbrel to keep my RA under control so that we will have a chance to have a second baby. I am really hoping this will be a temporary commitment to prednisone, perhaps a month or two until I am pregnant at which point hopefully I will get some remission and not need it anymore. I don't look forward to moon face or weight gain or insomnia or blood pressure issues. But I do really look forward to growing our family - and that will make it all worth it in the end.

Actually, the prednisone might actually help you conceive. While I was trying to conceive, my rhuemy talked about how RA can be systemic and can cause inflammation in the uterus - which leads to trouble conceiving. It's actually why a lot of doctors are starting to now recommend staying on biologics until pregnancy (or through it) because if you are flaring during ovulation, it is likely you have inflammation in your uterus and the embryo won't implant.

After my miscarriage, I refused to go back on Enbrel (it always did so much more for me than apparently it does for you). I went from July to like September without ANY meds, but finally it caught up with me. My Rheumy prescribed me prednisone, but told me to just take it in tapers to cut the flares off at the knees - 3 days 15mg, 3 days 10, 3 days 5. So I started, and I was doing some research on prednisone and conception and actually red some article on prednisone being prescribed to IVF patients to reduce inflammation and increase the chance of implantation after their procedures. So I decided to line up a prednisone taper with ovulation - and it worked.

All that being said - I totally understand the love/hate relationship with it. 6 weeks after delivering my daughter (like clockwork) I flared up. I had to start taking it again because of breastfeeding, and now it's not effective so I have to make the decision to either wean my daughter or chance taking Enbrel while continuing to breastfeed (there is some research that says it's safe, I just need to chat with the doc about it). I tell you though, I have never wanted to EAT ALL THE FOOD as much as I have the past 2 months while breastfeeding and taking prednisone.

I hope all works out for you and your family soon!

HEATHER: That is some interesting information about prednisone. Makes sense - thanks for sharing! Here's to hoping it contributes to our goals in as many ways as it can!! ~;o)